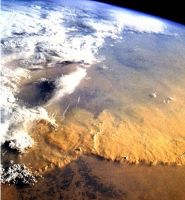 CZO and AGI distribute a hands-on learning exercise on the "Connectivity of Global Ecosystems: The Influence of Dry Deserts on Tropical Rain Forests"

The CZOs have been cooperating with the American Geosciences Institute (AGI) since 2013 to create hands-on learning exercises using CZO data for use in secondary education classrooms. The one-page, double-sided exercises have been included in AGI's Earth Sciences Week packets and sent to 16,000 teachers nationwide.

Additional hands-on exercises are available at the National Education and Outreach K-12 page.

Connectivity of Global Ecosystems: The Influence of Dry Deserts on Tropical Rain Forests

The Earth's Critical Zone and its global ecosystems are connected in a multitude of ways, sometimes surprising. In this exercise, we will investigate how dust and nutrients from north African deserts can be blown westward across the Atlantic Ocean and deposited in the rainforests of Puerto Rico. 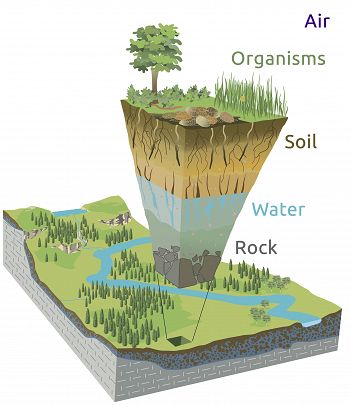 The Earth’s Critical Zone (CZ) is defined as the surface of Earth extending from the boundary between the vegetation and atmosphere, down through the soil, and to belowground depths where groundwater and bedrock interact. The CZ is where terrestrial life, including humanity, resides. The CZ provides many of the resources organisms need including fresh water, sustainable soils and a balanced atmosphere.

Critical Zone science is an emerging field of Earth Science seeking to integrate across multiple scientific disciplines to study how the CZ supports life and how the CZ responds to change. Ten Critical Zone Observatories (CZOs) have been established in the United States to support integrative research of CZ processes (criticalzone.org). CZ science requires large-scale systems thinking to understand all of the factors that influence the CZ. 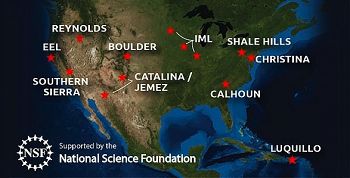 Learn more about the Critical Zone

This activity meets a key National Science Standard:
HS-ESS2-2: Analyze geoscience data to make the claim that one change to Earth’s surface can create feedbacks that cause changes to other Earth systems.

Use this activity as part of the Life Science unit on Interdependent Relationships in Ecosystems or the Earth and Space Science unit on Weather and Climate. Students should be familiar with concepts of convective systems, trade winds, nutrient cycling and ecosystems.

The objectives of this activity are to demonstrate that
(1) Earth’s ecosystems and Critical Zone are inextricably linked via feedback processes.
(2) Nutrients that feed ecosystems can be derived from outside the system.

We encourage instructors to use their creativity to modify and adapt this activity to meet their needs.

The Saharan and Sahel regions of North and West Africa have an arid climate with little plant growth. The desert heat creates rising air motions, leading to a large, strong surface low pressure system (Saharan Heat Low; SHL). As boreal spring transitions to summer at northern latitudes, moisture from the Gulf of Guinea penetrates into the Sahel, driving the formation of the West African Monsoon (WAM). Typically, temperatures decrease from the tropics pole-ward; however, during this time there is a reversal in this archetype leading to easterly winds through much of the atmosphere (African Easterly Jet; AEJ). The dry (northern; black dashed lines) and moist (southern; white dashed lines) air masses form a strong atmospheric frontal boundary across the Sahel which spur large thunderstorm development (~80% of Sahelian annual rainfall occurs June-September). 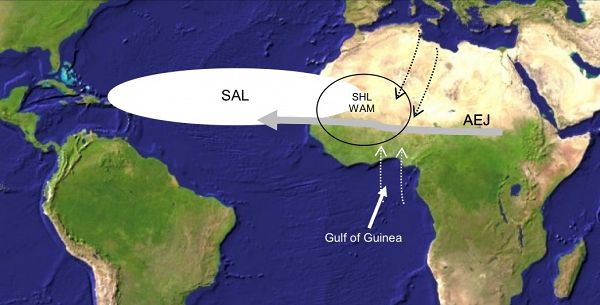 Dust storms are common during the WAM. These dust storms are produced by large near-surface winds generated by low level jets associated with the SHL, local orography, large scale weather systems intruding from the north and regional thunderstorms. Each phenomenon lofts dust particles high in the atmosphere for efficient long range transport via the AEJ. This dust-laden air mass is known as the Saharan Air Layer (SAL) 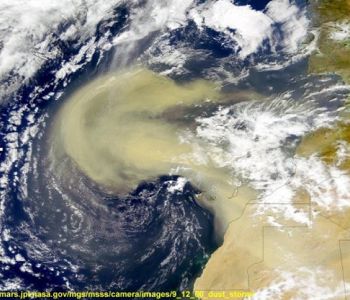 A massive sandstorm blowing off the northwest African desert has blanketed hundreds of thousands of square miles of the eastern Atlantic Ocean with a dense cloud of Saharan sand. NASA SeaWiFS image acquired February 26, 2000. 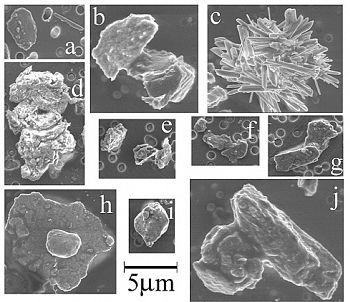 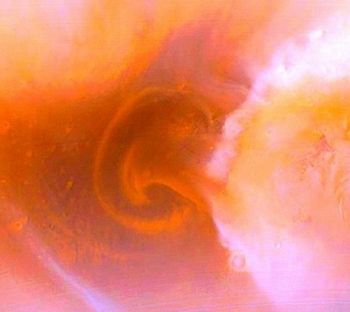 Dust storm on mars. Notice the formation of the dust-jet similar to the African Easterly Jet (AEJ) from the African continent. Image Credit 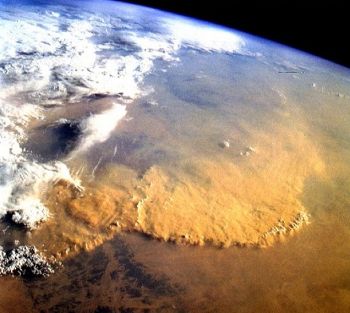 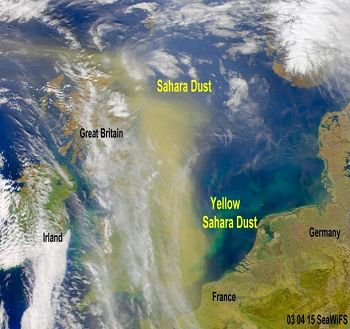 This 2 minute video produced by NASA uses LIDAR technology to show the movement of the Saharan Air Layer (SAL). It contrasts from the activity in that it emphasiizes the essential element phosphorous and its deposition into the Amazon Basin. However, the take-home points are identical to the calcium and Puerto Rico story from the AGI activity.

It is important to note that tropical ecosystems like the Amazon basin often lose critical nutrients due to hydrological processes and run-off. Thus inputs like these that enter via the SAL are essential to replenishing the lost stocks of nutrients.

Light Detection and Ranging (LIDAR) is a type of remote sensing and satellite technology that uses light to make high-resolution maps of Earth. LIDAR is the light equivalent of sonar. 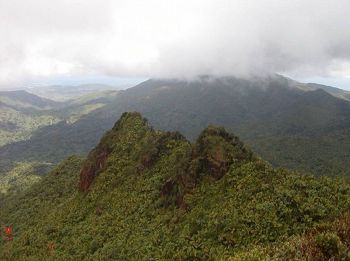 As the SAL moves across the Atlantic and into the Caribbean, elements derived from dust storms in North and West Africa are deposited into tropical island ecosystems. One major site of deposition is the Luquillo Mountains of Puerto Rico. The Luquillo Mountains are home to one of the ten CZOs. The Luquillo CZO in particular provides a unique setting to quantify the dust and nutrients that arrive in the neotropics due to the SAL.

The Luquillo Mountains extend upwards on the NE corner of Puerto Rico (E) with peak elevations of approximately 1050 meters. This creates a precipitation gradient which increases with elevation (F). Precipitation events promote the deposition of Saharan and Sahelian dust and crustal elements including calcium which is essential for soil fertility. 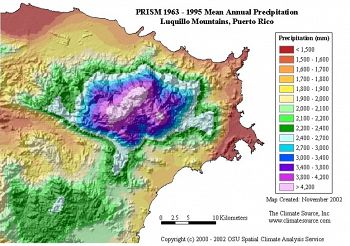 In the below portion of the Part II activity, students will download rainwater chemistry data and look for seasonal patterns of calcium inputs. Students will then interpret how precipitation-derived calcium compares with seasonal patterns of the SAL and seasonal dust inputs. Students should work to interpret the data to show the connectivity of meteorological process in North and West Africa and nutrient inputs into tropical rainforest.

Timing: Various length depending on scope of projects. 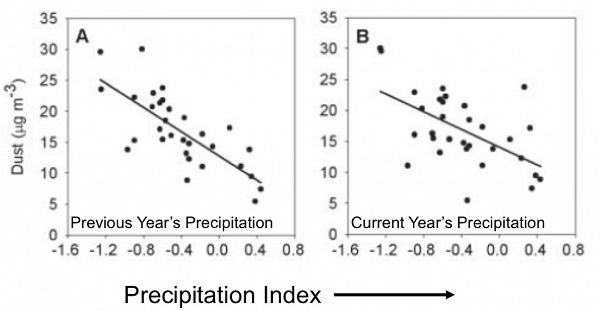 Rain patterns in the Sahel versus the amount of dust exported to the Caribbean.

These scatter plots are from Prospero and Lamb (2003): African droughts and dust transport to the Caribbean: climate change implications. Science 302: 1024-1027.

These dust measurement come from the island of Barbados.

The y-axis (dependent variable) shows mean dust loads from May- September in Barbados.

These data show a strong relationship between rain patterns in the Sahel and the amount of dust exported to the Caribbean.

Students can use these data to formulate new hypotheses regarding the relationship between future changes in precipitation in North and West Africa, nutrient inputs into the Caribbean and Amazonia, and subsequent changes in primary production of these rainforest ecosystems.

Sea-salt (blue) is churned up from the ocean based on surface wind speeds, and most prevalent along mid-latitude storm tracks and frontal regions including the Southern Ocean.

Dust (red) is most prominent over the Saharan Desert and can be seen interacting with Atlantic tropical cyclones during the end of the 2006 Atlantic hurricane season (e.g. @ 15 seconds).

Organic and black carbon (green) are dispensed into the atmosphere from biomass burning, the most prominent for this period being over South America from Aug-Oct 2006, Indonesia from Sept-Nov 2006, Africa in January 2007.

Sulphate (white) can be seen from two primary sources: fossil fuel emissions over Asia, Europe and the US, and from volcanic emissions. There is a persistently active volcanic emission from Mt Nyiragongo in the Democratic Republic of the Congo, Africa, and then a large eruption from the Karthala Volcano on Grand Comore Island, Comoros in January of 2007 (@ 1:57).

A massive sandstorm blowing off the northwest African desert has blanketed hundreds of thousands of square miles of the eastern Atlantic Ocean with a dense cloud of Saharan sand. NASA SeaWiFS image acquired February 26, 2000.

Rain patterns in the Sahel versus the amount of dust exported to the Caribbean.

Dust storm on mars. Notice the formation of the dust-jet similar to the African Easterly Jet (AEJ) from the African continent. Image Credit 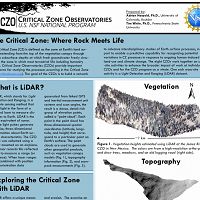 10 Jun 2014 - CZO and AGI create succinct exercises for secondary education classrooms. The exercises are based on CZO data and were distributed to 16,000 teachers