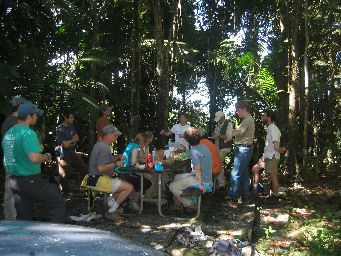 Publications and scientific findings are highlighted under News and posted below as they become available.  In addition, they are summarized in our Annual Report to NSF.

PI Meeting in the LCZO.

New findings about weathering rates in the Luquillo Mountains:


El Yunque rock is a majestic, anvil shaped promontory that has been an icon of the island of Puerto Rico since pre-Columbian times.  The barren rock protrudes above primary old growth forest and is enshrouded in clouds, constantly swept by the trade winds, and frequently stricken by hurricanes.  The rock receives an average of 3 rain showers per day and more than 5000 mm (14 feet) of rain every year and should be covered with vegetation and eroding rapidly in the island’s warm and dynamic tropical climate.  A research team from the University of Pennsylvania and the NSF supported Luquillo Critical Zone Observatory led by Jane Willenbring, Giles Brocard, and Frederick Scatena seeks to understand how quickly the rock and surrounding mountain are being eroded and how long-term rates of erosion differ from modern rates.  By counting the isotopes that are produced and accumulate in rocks when they are hit by cosmic rays, they have confirm that when Luquillo soils are not disturbed by human activity they erode at rates of 75 to 150 meters (250-500 feet) per million of years.  At this rate undisturbed forested areas have eroded approximately 4 to 8 cm (1.6 to 3.2 inches) since Europeans first landed on the island.  These erosion rates are slow compared to most tropical mountains and are orders of magnitude less than rates from areas disturbed by human activity.  They also confirm that forest cover can greatly reduce erosion even in a steep tropical environment with clayey soils and frequent hurricanes.
Using these cosmogenic techniques the research team also made the first measurements of the erosion rate of the rocks on El Yunque’s peak and found that the barren surface is only eroding at a rate of 4 meters (13 feet) per million of years.  At this rate, they have lost approximately 0.2 cm in elevation since Europeans first landed on the island.  The prominent rock’s relatively slow rate of erosion explains why it protrudes above the surrounding landscape and lacks the soil needed to establish forest vegetation.  The texture and composition of the barren El Yunque rocks also indicates they are more erosion resistant than the surrounding landscape because of the hardness and chemical stability they obtained when they were cooked in the chamber of an ancient volcano.  Most of the rocks that make up the Luquillo Mountains were not subject to the same type of heating and are less resistant to chemical breakdown and erosion.  Thus the island’s icon is literally a hard-headed cap that provides stability to the region (i.e. es un cabezón testarudo!). 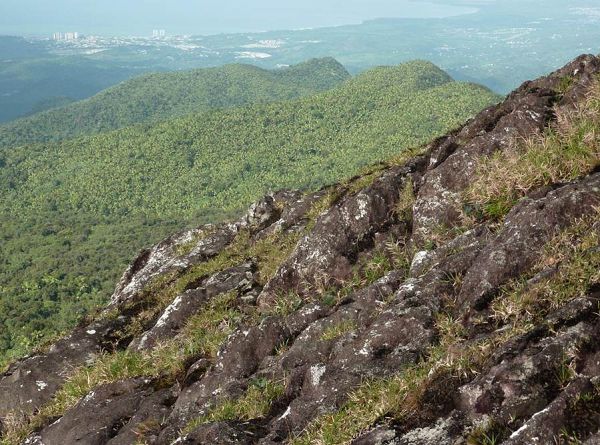 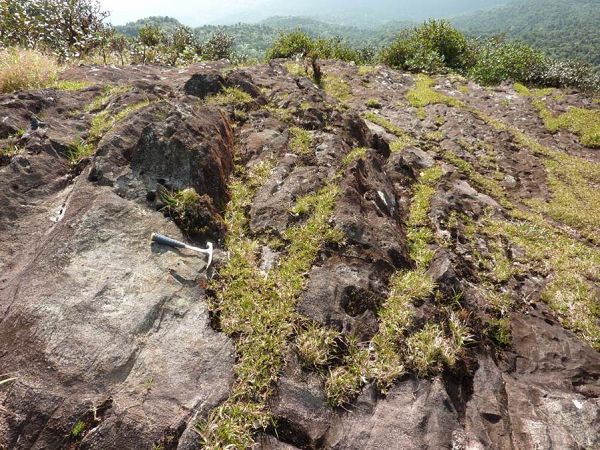 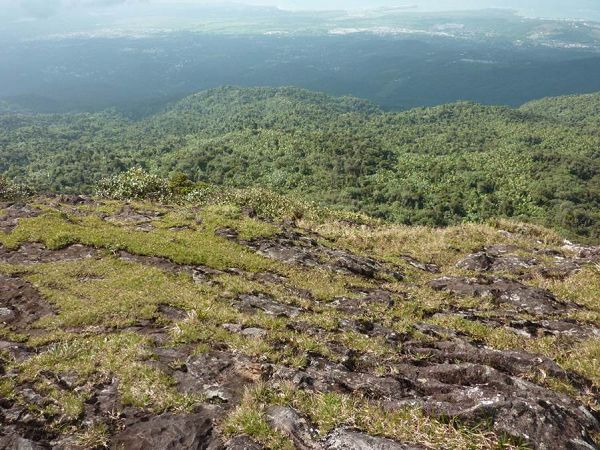 From the peak to the coast.

From the peak to the coast.