Hydrologic models that have been used in the Luquillo Mountains in the recent past have included the spatially explicit TOPOG (Schellekens et al 2004), statistically based-GIS models (Garcia et al 1996, Pike et al 2010) and most recently the tRIBS-VEGGIE distributed ecohydrologic model (Lepore et al 2011).  These models have been used in a variety of ways including landscape characterization, predicting flood levels, and slope failures.  Current efforts are focused on improving the soil moisture dynamics and vegetation representation in the tRIBS-VEGGIE model to be able to better predict landsliding and geologic hot-spots. 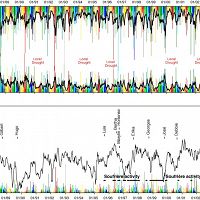 ET and Throughfall
The LCZO builds upon a long history of research on ET and throughfall.

Physically distributed Hydrology Model: tRIBS-VEGGIE
The tRIBS-VEGGIE model is an eco-hydrological  model that consists of a spatially distributed physically based hydrological model coupled to a model of plant physiology and spatial  dynamics (Ivanov et al., 2008a; 2008b). The tRIBS model has the capability to explicitly consider the spatial variability in precipitation fields, land-surface descriptors and the corresponding moisture dynamics, stressing the  role of topography in lateral soil moisture redistribution and accounting  for the effects of heterogeneous and anisotropic soil.  Basin hydrological response can be simulated at very fine temporal  (sub-hourly) and on an irregular spatial mesh (10-lOOOm). The irregular mesh allows for the use of smaller computational elements to represent regions within the basin of interest while using larger elements for less critical regions..
The dynamics of each computational element in tRIBS-VEGGIE model are simulated separately but spatial dependencies are introduced by considering the surface and subsurface moisture transfers among the elements, which affect local dynamics via the coupled energy-water interactions. Consequently, when applied to a catchment, the model offers a quasi-three-dimensional framework by which lateral moisture transfers and difference in topographic characteristics may lead to the spatial-temporal variability of states (Ivanov et al., 2008b).

VEGGIE models the spatial  distribution  of vegetation  types (e.g., trees  vs. grasses), and pertinent properties of the vegetation state  (e.g., vegetation fraction, leaf area index, biomass etc) (Ivanov et al., 2008a; 2008b) and enriches the hydrology model by accounting  for  vegetation characteristics that affect both water and  energy balance dynamics. Aboveground, the canopy has the ability to intercept and retain precipitation that affects the soil infiltration process, and the energy budget. Below ground, vegetation influences the vertical distribution of soil moisture via plant water uptake, and to the cohesion of the soil-bedrock-root matrix, depending on the distribution of roots. VEGGIE utilizes the Plant Functional  Type (PFT) vegetation classification scheme (Smith  et al., 1997), and allows for a single computational element to simulate multiple PFTs that may differ in life form (e.g., tree, shrub, grass), vegetation physiology (e.g., leaf optical and photosynthetic properties), and structural  attributes (e.g.,  height,  leaf  dimension,   or   root),   each  interplaying differently with the hydrological response of the basin.
The slope stability module involves the assessment of the Factor of Safety, FS, by applying limit equilibrium  analysis. The Infinite Slope model is commonly used in literature and  it  provides a well determined static equation for the calculation of the FS (Taylor, 1948), as described in detailed in Arnone et al. (2011b). The approach used in Arnone et al. (2011b) for the landslide module accounts for the soil moisture in the unsaturated zone and water table dynamics, but it neglects the effect of matric suction when computing the FS and the corresponding shear strengths in unsaturated soils. The new factor of safety to be used in this effort now includes the matric suction effect and the role of vegetation in providing cohesion and resistance to landsliding as well as adding weight that promotes sliding.