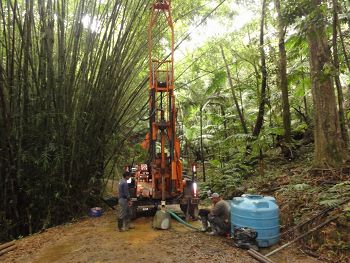 Observation of deep critical zone processes are made at a series of instrumented bore holes in VC, QD, and hornfel lithology (Buss et al 2012, and Buss, Orlando, Brantley write-ups in this volume).  Soil and regolith water and gas samples are sampled using suction samplers installed according to our previous studies and CZEN standards (see http://www.sas.upenn.edu/lczo/ and CZEN.ORG).
Luquillo Critical Zone Soil Network consists of soils collected from 216 profiles from 24 sub-watersheds . Profiles were stratified by two different parent materials (VC and QD), three different forest types (Tabonuco, Palm, and Colorado), and three hillslope positions (ridgetops, slopes, and valleys).
Water chemistry is sampled weekly and on a campaign basis and will be processed at the USGS WEBB laboratories and at the University of New Hampshire. While the water chemistry at most of the proposed aquatic sampling nodes has been sampled before, sampling frequency has been erratic and the actual data is stored in different ways and at different institutions. The LCZO is ameliorating this situation by developing a centralized data management archive where researchers can access existing data and share the new data they collect.
The late Holocene response to storms and sea-level change of the Luquillo Mountains is being deciphered by studying the sedimentary records of coastal plain sediment. This research uses micro-fossils, isotopes and stratigraphic indicators from shallow sediment cores taken in the coastal zones of both rivers.  The environmental histories developed from the coastal plain sediments will then be compared to the historical record and the geologic recorded in upland floodplains and landscapes.