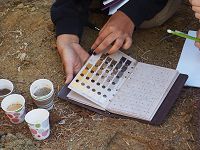 The Southern Sierra Critical Zone Observatory aims to help educate the next generation of scientists and encourages young students to get involved with the many aspects of environmental studies. Through involvement with the neighboring universities such as the University of California, Merced, Observatory investigators, staff, and students interact with and teach the future generation of environmental researchers. 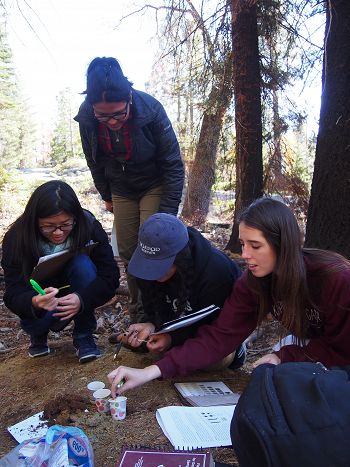 On November 5, 2016, nine undergraduate students from UC Merced explored Observatory research sites in the Kings River Experimental Watersheds. With the guidance of UC Merced professor and Observatory investigator Asmeret Berhe, Field Manager Erin Stacy, and Outreach Manager Michelle Gilmore, students were able to take the knowledge gained from the classroom and apply it into the real world environment through small-scale field research experiences.

At Providence Creek in the Sierra Nevada, my fellow classmates and myself explored methods and measurements used by critical zone researchers. On this trip we were able to see the site’s eddy co-variance flux tower and the Critical Zone Tree. After exploring the sites, the class then split into two teams to conduct two different kinds of soil surveys.

One of the two surveys focused on the soil moisture of the area. Using a handheld Hydrosense TDR sensor, the team recorded the volume of water per given volume of soil every 25 meters along a 200-meter transect. This was done four times in the north, south, east, and west direction from point zero at the flux tower. Erin Stacy is comparing student measurements to data generated by the on-site automated Cosmic-ray Soil Moisture Observing System. 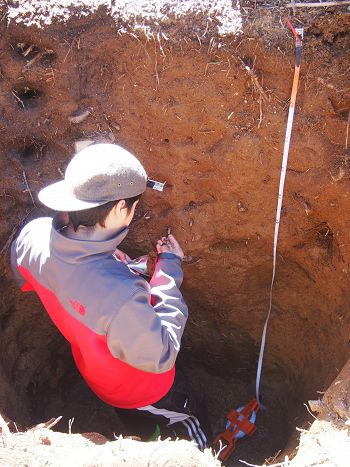 The second survey analyzed a 180 cm deep soil pit, where the students were able to examine the soil’s texture, color, and pH. The soil pit was a new experience for most of the students. Even though the entire class has studied soil profiles, seeing one in real life is a whole new ball game; and the students learned that fast. We were not only experiencing the process of determining soil characteristics such as color and texture, but also the human errors that come with these procedures. Using teamwork and communication skills, students determined the characteristics of the soil samples from different horizons in the soil profile.

Students taking Dr. Berhe’s course are working toward degrees ranging from earth system science to environmental engineering to mathematics. With the large variation of majors seen in the class, this was a first time experience being out in the field for most students, using professional equipment, and trying to answer current environmental questions.

Applying the knowledge gained from a classroom into action can have tremendous importance. By the end of this course, every student stated that they had become more interested in soil science, rather than subjects such as ecology or hydrology which had been the class’ original top choices of environmental subjects. This change in perspective happened after the field experience. The experience seemed to bring out the excitement of environmental studies, showing students that after years of learning about research methods, environmental processes, and analytical techniques, knowledge gained can be applied in a real-world setting and could make a difference in the world in the future through environmental science. 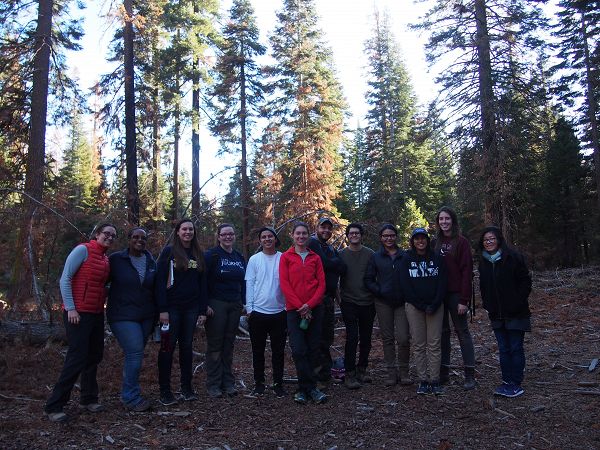 10 May 2016 - How do tree canopies affect winter wonderlands? Students from the Center for Advanced Research and Technology are finding out.

19 Mar 2013 - High school students from the Fresno area conduct research at the Providence site on snowpack depth and density - and how those vary around trees.