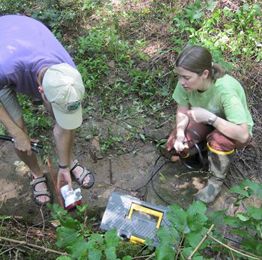 The Christina River Basin Critical Zone Observatory is developing and deploying an advanced sensor network for real-time observations of hydrological and biogeochemical processes.

These sensors range from basic meteorological and hydrological sensors that can be widely deployed at low cost, to advanced commercial field-instrumentation such as submersible UV-Vis spectrometry, to home-made geochemical sensors constructed from readily available electronic components.

We are beginning to participate in the emerging open-source hardware movement to further the development of environmental sensors. Visit the CRB-CZO sensor blog at czo.stroudcenter.org/sensors.

Implementing a large scale sensor deployment for watershed assessment has previously been limited by the high cost of the datalogging and communication infrastructure. 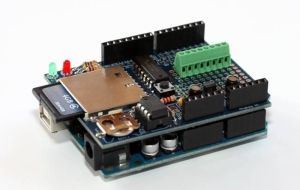 By significantly decreasing the cost of the datalogging and communication hardware, resources can be focused on installing more sensors for greater spatial coverage.

Researchers, students, and individuals can easily build and deploy inexpensive dataloggers without the need for electronics experience, complicated software, or specialized tools. Dozens of low cost boards allow even novice users to build devices using boards that connect in a modular framework. 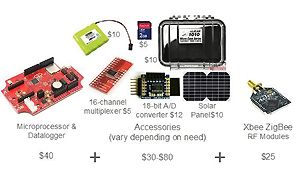 We believe that using open-source electronics hardware for watershed instrumentation will transform our ability to deploy sensors, field instruments, and other electronic “eyes and ears” to unprecedented levels. High quality commercial sensors are relatively inexpensive and widely available. Easy customization of the Arduino node interface hardware and software means virtually any sensor can be used.

Other custom devices such as a remote streamwater sampling system and a multi-chamber respirometer controller can be built using the same type of Arduino microprocessor boards. See Gallery below for examples.

The information in this page was presented at the 2011 Fall Meeting of the American Geophysical Union. View the poster in the Associated Files section below.