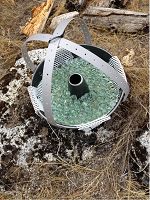 A team of researchers found that dust provides a much greater amount of nutrients to vegetation in the Sierra Nevada than previously thought.

Originally published by Seeker on March 28, 2017

After the conservationist John Muir devotedly hiked the Sierra Nevada mountain range in the late 19th century, he penned some of the greatest American nature writing ever put to paper and launched the Sierra Club, which remains one of the most influential members of the nation's conservation movement.

Thanks to his efforts and those of generations that followed, the wild beauty of Muir's beloved Sierra Nevada and its giant sequoias continues to thrive, albeit with a much greater amount of stress due to human-caused climate change. But new research suggests an unlikely ally in the preservation of Muir's iconic muse.

Credit, it seems, must be given to dust.

In a paper published today in the journal Nature Communications, a team of researchers found that dust provides a much greater amount of nutrients to vegetation in the Sierra Nevada than previously thought. The dust comes from as far away as the Gobi Desert in Central Asia and as nearby as California's Central Valley.

To continue reading this articel from Seeker click here.