The CZOs are working toward a unified holistic theory of the coupled hydrologic, atmospheric, geochemical, geomorphic, and biological processes in the Critical Zone, that integrates into a framework of Critical Zone structure and evolution.

The Critical Zone Observatories are working toward a holistic conceptual model of Critical Zone evolution and function that integrates new knowledge of coupled hydrological, geochemical, geomorphic, and biological processes.  The modeling efforts include consideration of positive and negative feedbacks and their distribution in time and space.

The environmental gradient figure presents an organizing structure for the CZOs. The conceptual model is loosely organized around the concept of the state factors of soil formation, and demonstrates how the CZOs work – it is a conceptual model of the evolving CZO network that allows CZO researchers to study CZ processes. Through the network, researchers can access and integrate data in a way that allows isolation of environmental variables and comparison of environmental effects across gradients of time, lithology, human disturbance, biological activity and topography. 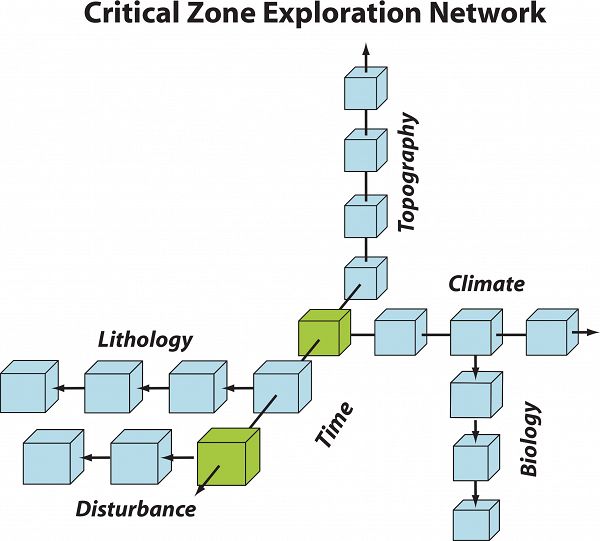 Environmental gradients provide an organizing structure for the CZOs.

Landscape change over geological time results from the interplay between tectonic processes that move Earth's crust and climate-driven geomorphic and geochemical processes that rearrange material at Earth's surface. In the short term, mass transport in hillslope and fluvial systems coupled to water-rock interactions contribute sediments and solutes to hydrological fluxes. While these processes are tied to the hydrologic cycle, they are further modulated by the co-evolution of soils and vegetation.

In most landscapes the soil mantle is a representation of modern processes superimposed on a legacy framework of past environments. While soil components like A horizons may record agricultural activities of past centuries, processes that break down rock into soil typically proceed at much slower rates.

Such understanding is too coarse to predict the trajectory of Critical Zone evolution and function over short and a wide range of time scales. Similarly, this knowledge is insufficient to decouple geological, climatic, and biological forcings on Critical Zone evolution and function that often operate at different rhythms and time scales. For example, plant growth is known to affect surficial weathering and hillslope form by bioturbation, fracture formation, alteration of hydrologic fluxes, soil CO2 generation, and profusion of organic weathering reagents, all of which operate on different time scales.

These individual processes have yet to be integrated into a holistic and predictive conceptual model of Critical Zone evolution and function. This limitation is primarily due to incomplete knowledge of couplings between hydrological, geochemical, geomorphic, and biological processes that include both positive and negative feedbacks and their distribution in time and space - a primary goal of the Critical Zone Observatory program.

One approach to conceptualizing the Critical Zone is using an open system thermodynamic model. In the model presented below, the relative energy and mass transfer components include energy and mass flux into the CZ, energy storage within the CZ, and export of dissipative products from the CZ. Note: the dashed-line box indicates the open system boundary as defined for the model derived in Rasmussen et al. (2011). 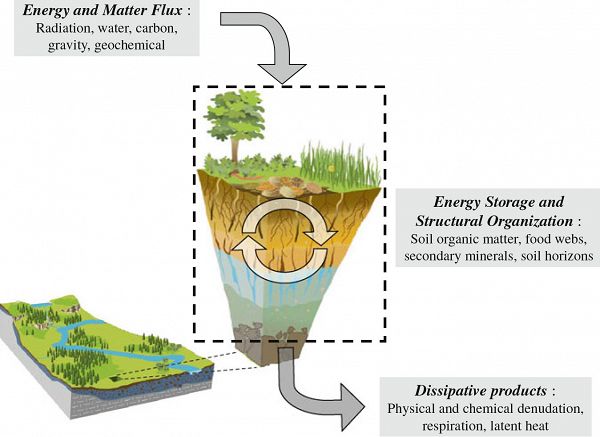 In the next decade a well-linked CZO network and the associated multidisciplinary researchers will develop a theoretical framework to describe how physical, chemical, and biological processes interact to generate the architecture of the Critical Zone in the present landscape and how that architecture may control processes within and on it. CZO data sets collected under a common instrumentation protocol and data structure will be employed to determine the roles of climate and geologic setting that have thus far have only been loosely constrained.

Environmental gradients provide an organizing structure for the CZOs.