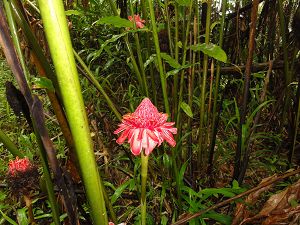 The Luquillo Critical Zone Observatory is located in the Luquillo Mountains of Northeastern Puerto Rico, which rise from sea level to over 1075 m over a distance of 15 to 25 km. Precipitation increases with elevation such that subtropical dry conditions prevail at the coast while elfin cloud forest that can receive over 5000 mm/yr cap the upper summits. Within the Luquillo Mountains, four main Holdridge life zones are delineated on the basis of temperature and precipitation: subtropical wet, subtropical rain, lower montane rain, and lower montane wet. There are also areas of subtropical moist forest at lower elevations on the southwest slope and areas of subtropical dry along the coast and outlying islands.