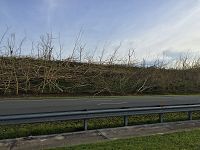 Across the 28,434-acre El Yunque National Forest, ferns and palms have been stripped of their fronds, and hardwood trees snapped in half like twigs. What was once a blanket of emerald green draped across the mountainous landscape is now a brown pile of detritus. “El Yunque National Forest will remain closed until further notice,” the Forest Service’s website says.

But like the cellphone towers and power poles that will rise again, so will the rain forest. After all, hurricanes have been menacing this region for millennia.

Located in the northeastern part of the island, the El Yunque National Forest is a tropical paradise that includes the 3,500-foot-high Luquillo Mountains. The 170-plus inches of rain that fall each year cascades off the steep slopes through sparkling waterfalls.

The forest is home to hundreds of plant and animal species, including the critically endangered Puerto Rican parrot. And it has been intensely studied for decades with a research station located in the Luquillo Experimental Forest, a portion of the national forest.

The effects of Hurricanes Hugo and Georges, which tore across the region, were well-documented. But this situation is unique because Hurricane Irma grazed the area just a week before Maria creating a “one-two punch,” said Alan Covich, an ecology professor from the University of Georgia who has studied Puerto Rico for years.

We can assume sustained winds in excess of 140 mph thrashed this mountainous terrain, especially because wind speeds tend to rise with elevation. When Maria made landfall in Puerto Rico’s southeast, it packed maximum sustained winds of 155 mph — the strongest hurricane to strike the island since 1928. But we may never know exactly how strong the winds actually were in the rain forest. “The odds of finding the weather station intact and with accurate data … are probably zero,” Covich said.

So what exactly happens when the rain forest in the Luquillo Mountains gets pummeled by hurricane-force winds?

Based on previous studies in the Luquillo Mountains, a continuum of wind speeds and their effect on the vegetation has been established. At a relatively calm 38 mph, very minor leaf stripping begins. When the wind creeps above 50 mph small branches start to break off. Large branch damage and defoliation begins around 60 mph. Weaker tree trunks will begin to snap at about 72 mph, but the strongest trees can withstand up to 100 mph.

A scientific survey of the rain forest has not been conducted since Maria struck. All forest operations “have been suspended” the Forest Service website says. But with Hurricane Hugo in 1989, Covich said the rain forest sustained substantial, though somewhat patchy, damage. “Depending on the terrain, whether it was on a ridge or in a valley, the lee side or windward, made a big difference,” he said.

Forest regeneration didn’t take long after Hugo. Covich said that with Hugo the rain forest was greening up vigorously within six to 12 months. With a year-round growing season and copious amounts rain, ferns and palms start to grow back almost immediately. Hardwoods that were stripped of branches and leaves followed.

For the trees that had their trunks uprooted or snapped, it was a different story. They typically don’t grow back, which creates a gap in the forest for other plants to colonize.

With the extreme winds experienced and the one-two punch of Irma and Maria, Covich suspects it will take longer for the forest to recover. The composition of the plant and tree species may be different, with some becoming dominant that formally weren’t, but the rain forest will return.