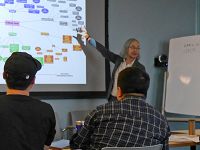 On November 6-10, the BcCZO had the honor of hosting a visit from the China Geological Survey (CGS; http://en.cgs.gov.cn/).

The purpose of the visit was to meet and discuss critical zone (CZ) science, from scientific results to institutional structure to future directions for CZ science.  In addition, extensive discussions between the guests and hosts regarding scientific approaches and results were held. It was a great time for the exchange of ideas and methods. We very much appreciate the assistance of Youchao Chen (a visiting PhD student from the Institute of Mountain Hazards and Environment at the Chinese Academy of Sciences) who interpreted and presented to the delegates in Chinese.

During their visit, the CGS delegation was also able to visit the BcCZO field sites with our field manager, Nate Rock, and his crew. They also took a trip to Denver with John Fulton (USGS) to look at radar station observing stream flow on the Cheery Creek.

All in all, it was a great visit for everyone!!

Presetions included one by Youchao Chen (a visiting PhD student from the Institute of Mountain Hazards and Environment at the Chinese Academy of Sciences.) who presented to the delegates in Chinese.

Introduction the the Chinese Geologic Survey and their ressearch.

03 Nov 2017 - During the week of October 30th, Penn State and SSHCZO hosted 15 scientists from the China Geological Survey, with interests ranging from saltwater...