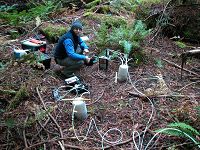 San Francisco's KQED public television features the Eel River and the Southern Sierra CZOs in a production of QUEST, a science and technology program.   This episode, entitled "The Secret Life of a Raindrop"  is scheduled to air on KQED Wednesday, November 11, 2015 at 7:30pm.

From the accompanying article:

According to a widely held belief, you can’t squeeze water from a rock. But researchers from UC Berkeley who are trying to better understand where water is stored in nature are challenging that old adage.

After nearly ten years of studying a steep, 20-square-mile area near the South Fork Eel River in coastal Mendocino County, the scientists have shown that for trees and other plants, deep and highly fractured rock formations beneath the Earth’s surface are a much larger water reservoir than was previously known.

The work to understand the role that “rock water” plays in the hydrologic cycle began in 2006 when researchers from UC Berkeley embarked on a multi-year study sponsored by the Keck Foundation called the Hydrowatch project. It was designed to precisely monitor and measure the pathways of water in Mendocino County’s Angelo Coast Range Reserve as it cycles from the groundwater table to the tops of trees and into the atmosphere.

“We were really interested in learning the fate of precipitation in the land surface,” explains Todd Dawson, professor of Integrative Biology at UC Berkeley. “So really trying to figure out when precipitation arrives at the site, where does it get into the rock, where does it get into the stream, how does is recharge the ground water, how much of it is used by the vegetation, and ultimately, how much of it ends up in the streams and going back out to the Pacific Ocean.”

Learning more about where water consumed by forests, or flowing through streams actually comes from is important, the scientists say, in better understanding the impact of climate change.

In 2013, the project expanded to become part of a landmark study sponsored by the National Science Foundation called the Critical Zone Observatories Program. Today, the site is called the Eel River CZO and it’s part of a national network of ten similar watershed observation sites across the United States – each with unique climate, geology and vegetation.