What are extreme weather events and how do they change the Critical Zone? 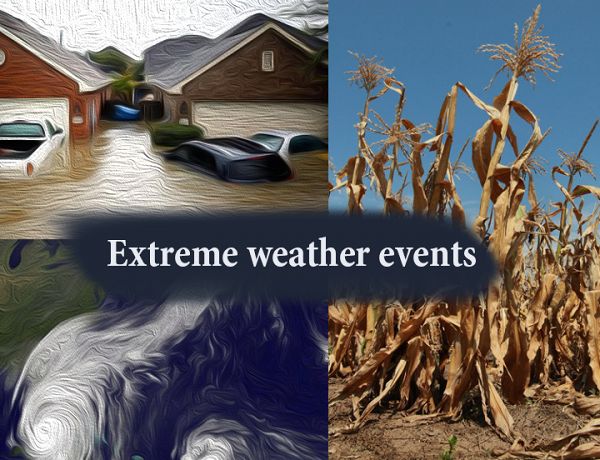 Extreme weather events changing the Critical Zone. Examples shown in a flooded neighborhood, a satellite image of hurricanes, and corn field during drought.

Extreme weather events can broadly be lumped into five categories based upon their size, duration, how they form, and their impact. The five categories of extreme weather are: extreme hot and cold events, droughts and extreme rainfalls events, hurricanes and ice storms, wildfires, and convective storms events that produce tornadoes and hail storms. Determining whether a weather event can be classified as ‘extreme’ is not simple. It requires consideration of factors like location (latitude and elevation) and time (season) because ‘normal’ weather is defined based upon historical weather data. For example, an 80° F (27° C) day in November is not an extreme temperature for Los Angeles, California which averages 73° F (22° C) that time of year but would be an extremely warm day for Boulder, Colorado that normally experiences a high of 53° F (12° C). Many scientists use statistical methods to interpret extreme, such as a 90th percentile, which means that the event is hotter, dryer, wetter, or colder than 90 percent of previous weather data. In addition, the frequency of a type of event is also used to determine if it is an extreme event. For example, hurricanes are expected in tropical regions with high moisture and warm oceans, but 2017 saw an unlikely frequency of hurricanes.


Extreme hot/cold events are unusually hot/cold periods lasting for from only one day to months. Extreme hot/cold events can kill people, particularly elderly and children. These very hot or very cold days are hypothesized to limit the expansion of plants into new ecosystems, controlling where plants and animals can live. For example, very cold winter nights prevent the spread of trees to higher elevations and more northern latitudes across North America (Aitken et al., 2008). Moreover, very hot and dry conditions are bad for preventing and containing wildfires. The extreme heat and dry winds helped spread the deadly wildfires that gripped California for October 2017.

Droughts are generally defined as lower than expected precipitation or depletion of water resources over an extended period. One familiar example is the mega-drought that has been afflicting California for nearly two decades, causing widespread losses of farming land and water-use restrictions in urban areas. In the Sierra Nevada mountain range of California, over 100 million trees were killed from extreme drought conditions, which was studied by Southern Sierra CZO scientists. A far worse situation than the loss of trees is the unprecedented famines from prolonged droughts in East Africa.

Droughts can have additional effects on nutrients in soils and in rivers. Loecke et al., (2017) at Intensively Managed Landscapes CZO (IML) studied changes in soils and rivers during the 2012 drought in the Midwestern U.S. and very wet 2013 spring. The drought conditions created high nitrogen concentrations in soils, which were washed off during the heavy 2013 spring rains (Loecke et al., 2017). The mobilized nitrogen caused nitrogen to exceed E.P.A. drinking water standards. The authors further note that climate change is poised to increase climatic variation and increase the frequency of events like this.

Extreme rainfalls are the leading causes of flooding. For example, an extreme rainfall event from Tropical storm Irene gave Vermont as much as 11 inches (27.5 cm) of rain in less than 12 hours, causing $733 million dollars in damage in Vermont alone! Extreme rainfall events can scour streambanks, leading to mass failures such as landslides. Moreover, subsequent flooding of floodplains sweep away soils and deposit boulders, rocks, sand, and silt onto the floodplain. Learn more about flooding from the USGS here. This can cause tremendous damage to buildings, farms, and other human structures in its path.


Wildfires can be devastating for vegetation and humans. Very hot wildfires can destroy entire forest canopies and burn carbon stored in soils. More about the effect of wildfires on soil can be found in a previous blogpost here. Wildfires leave landscapes susceptible to erosion and mass failures (Neary et al 2005). However, wildfires are an essential part of semi-arid ecosystems.
Hurricanes, ice and snow storms, and convective storms can impact the Critical Zone but have a substantially more visible impact on human life. The devastating wind speeds from Hurricane Maria nearly wiped out most foliage of the tropical forests. The Luquillo CZO in Puerto Rico sustained heavy damage from Hurricane Maria’s 155 mph winds. The most immediate impact has been felt by the residents who have gone without power for many weeks. However, these storms are not limited to the tropics, extreme winds and convective storms hit higher latitudes of North America, Europe, and Asia. In October 2017, winds from a Nor’easter toppled trees and left more than one million people without powers for days across New England. Moreover, convective storms creating hail and tornadoes can be very expensive. In 2015, NOAA’s Severe Storm database estimated that 5,412 storms caused over $15 billion dollars in damage! 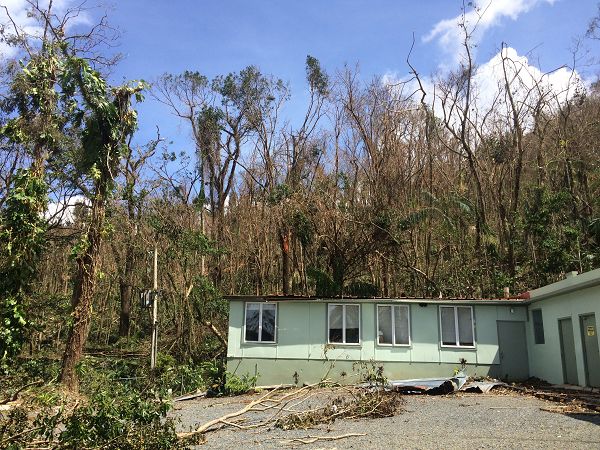 Hurricane damage to Luquillo CZO from Hurricane Maria. Fall trees and debris are shown all other the property of the Luquillo CZO’s field center.

Knowing how these events shape the Critical Zone involves collecting data and (bad) luck to capture the aftermath. The only way to understand how the Critical Zone and its life-sustaining processes are impacted by extreme weather events is to have baseline information before and after they occur.  Keeping measurements of plant communities, soil and regolith properties, and hydrological properties is needed before the storms of next year hit!

Extreme weather events changing the Critical Zone. Examples shown in a flooded neighborhood, a satellite image of hurricanes, and corn field during drought.

Hurricane damage to Luquillo CZO from Hurricane Maria. Fall trees and debris are shown all other the property of the Luquillo CZO’s field center.