How does fire change a forest?

Nicholas Dove in Adventures in the Critical Zone

There is an idiom that states someone too involved in the details “can’t see the forest for the trees”. This statement is ever-so perfect to describe the typical experience humans have with forests. For those lucky enough to be amongst the northern hardwood forests, we observe their annual promenade of colors in autumn. For those unlucky individuals among us, we feel the irritation of allergies as their floral displays remind us of pollen season. Our experiences are daily, yearly, and for those avid outdoor-types, more than a decade. However, forests are part of much longer cycles that we often are unable to see. We humans generally can’t see the trees of the forests as part of a cycle, one that naturally involves growth and destruction. One major disturbance that turns a lush, earthy green into smoldering, charred remnants is forest fires. This brings us to our question: How does fire change a forest? 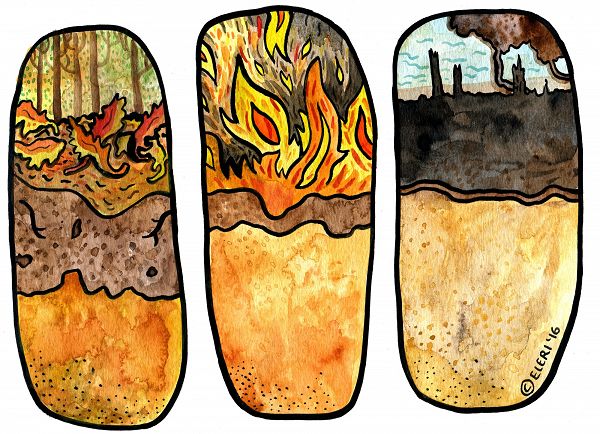 
Forest fires occur globally and are important parts of almost many forest ecosystems, although the frequency of fire disturbances vary considerably. They can cause massive destruction to forests and rural communities, which can be expensive to individuals and governments. For example, the 2012 forest fires in Eastern Russia and  2013 forest fires in California burned greater than 500,000 acres (2,000 km2) and cost more than $200 million in damage. In addition, there is a great cost for equipment and human power to combat the flames. Annually more than $1 billion are spent on wildland fire-fighting (Whitlock 2004). This does not even take into account the emotional toll for and tragic losses of life.


Setting aside the terrible cost of life and property, forest fire effects can limit the recolonization of the scorched earth. In high temperatures fires, the burning of organic material in the forest floor releases oils into the mineral soil. Accumulation of these oils at depth within the soil can create a hydrophobic layer. These water-repelling layers dramatically increase the potential for erosion of the remaining topsoil above them (DeBano 2000). Furthermore, fires can have large effects on forests nutrient cycles. Forests are commonly nitrogen-limited and need this nutrient for seedling establishment. Thus, a forest fire can cause a net negative loss of nitrogen from the forest soil. However, the changes in the short term are different. Fire may also act as a nitrogen transformer. Nitrogen “locked” in organic material, which was previously unavailable to plants is converted (mineralized) into plant available forms in nutrient-rich ash (St. John & Rundel 1976). So, at least in the short-term, fire may actually increase soil fertility.


Soil biology is also affected by fire. Although it is generally accepted that heat from fire only impacts upper soil layers (DeBano 2000), extreme temperatures in these horizons can cause drastic changes in soil microbial communities  throughout the soil profile. Lethal temperatures for fungi are 60-80°C while for bacteria are 100-120°C (Dunn et al. 1985). Research being conducted at the Southern Sierra Critical Zone Observatory suggests that species richness of fungi and mycorrhizal colonization (the symbiotic relationship between roots and fungi) declines significantly due to forest fires (Dove and Hart, in prep).Changes to the soil microbial communities may have cascading effects throughout the entire ecosystem (Perry et al. 1989).


Another issue arising from the fire is the release of carbon dioxide (CO2). The burning of wood and organic matter stored in the surface of the soil emits CO2 to the atmosphere, much like burning coal or gasoline. Because climate change is predicted to increase drought conditions in many of these forests, this has been hypothesized to create a positive feedback loop. Thus, as the climate becomes drier and warmer in many forested areas, the probability of forest fires is expected to increase (Westering et al. 2006). This could have important economic ramifications as well, such as California’s carbon accounting.


The magnitude of destruction generally depends on the fuel load present at the time of fire. Fuel for fire, as one would expect, are the dead branches and small trees that cover the forest floor. When these fuel levels are low, fire severity is generally low, most mature plants survive, and combatting these fires is relatively easier. However, accumulation of forest fuels (partially due to lack of fire) can lead to more intense fires, and as a result greater destruction. Thus, it is important not to generalize all forest fires as bad and important to remember that some fire is necessary to reduce hazards of large fuel accumulation. 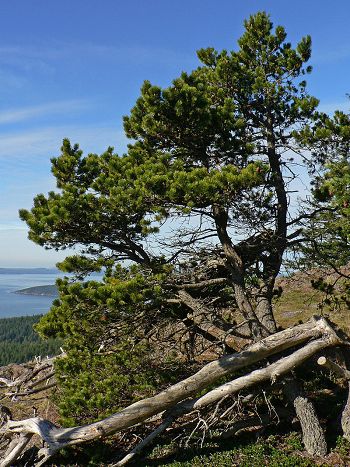 Frequent, low-severity is actually a part of many ecosystems’ natural cycle, and these burns create gaps in the forest that provide habitat wildlife (such as the endangered northern spotted owl) and native plants. In fact, Pinus contorta (lodgepole pine) and many other seeds cannot break their dormancy needed to grow unless a fire burns their seedcoat (Lotan 1976). Thus, the cycle of those forests require the fire for life.