Data for this paper is available here. 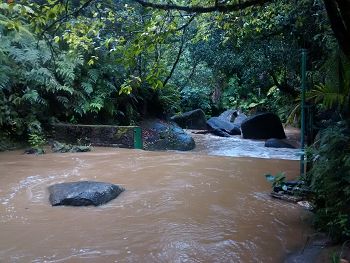 Droughts, which can strongly affect the coupled hydrologic and biogeochemical systems, are projected to become more prevalent in the tropics in the future. We assessed the effects of a prolonged, extreme drought during an El Niño year in 2015, on stream water composition in the Luquillo Mountains of Puerto Rico. First, we demonstrated that drought baseflow in the months leading up to the study was sourced from trade-wind orographic rainfall, suggesting a resistance to the effects of an otherwise extreme drought. In two catchments (Mameyes and Icacos), we sampled a series of four rewetting events that partially alleviated the drought. We collected and analyzed dissolved constituents (major cations and anions, organic carbon and nitrogen) and suspended sediment (inorganic and organic matter (particulate organic carbon and particulate nitrogen)). The rivers appeared to be resistant to extreme drought, recovering quickly upon rewetting, as 1) the concentration - discharge (C-Q) relationships deviated little from the long-term patterns; 2) “new water” dominated streamflow during the latter events; 3) suspended sediment sources that accumulated in the channel during the drought flushed out during the initial events; and 4) the severity of the drought, as measured by the US drought monitor, was reduced dramatically after the rewetting events. Through this interdisciplinary study we were able to investigate the impact of extreme drought through rewetting events on the river biogeochemistry.