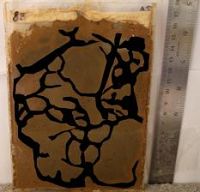 Scientific investigations sometimes take unexpected twists and turns. When Emma Harrison, a graduate student at the University of Pennsylvania, began digging trenches in the mountains of Puerto Rico to study how the soil mantle responds to rapid changes in erosion, she couldn’t help but notice the worms.

The thick Puerto Rican soils were chock-full of the wriggling creatures: endogeic worms, which spend their lives burrowing through the soil and feeding on bits of decaying organic matter underground, as well as much larger anecic worms, which in the Luquillos are typically 2 millimeters wide and as long as a human forearm. Anecic earthworms live deeper in the soil profile but build long, vertical burrows so they can feed on organic litter at the surface.

Harrison had gone to northeastern Puerto Rico’s Luquillo Mountains, which rise steeply from sea level up to 1,075 meters in elevation, to look into why erosion rates aren’t as high as it seems they should be. Uplifted between about 37 million and 28 million years ago, this range is the first barrier on the island encountered by the prevailing easterly winds, which carry moisture from the Caribbean Sea. The resulting orographic effect produces copious rainfall, exceeding 5 meters per year at higher elevations, where a dense rainforest thrives. “With the amount of precipitation [the area] gets, you should be eroding the range at a much quicker rate,” Harrison explains. Whereas erosion rates in the Luquillos range from about 0.05 to 0.18 millimeters per year depending on elevation, rates are typically much higher in other high-precipitation tropical environments, she says; the mountains of Taiwan, for example, lose between 2.2 and 8.3 millimeters per year.