Sorting out the effects of storms on landscapes in Luquillo 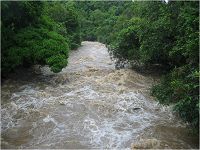 Tracing sediments with RFID in the Rio Mameyes.

The slow erosion of mountains is driven by the cumulative effects of innumerable storms. There are few places more stormy than the Luquillo Mountains, where as much as a meter of rain can fall in single day. Many researchers argue that increased storminess drives greater net erosion - a key concern with climate change projections - but how is unclear. We have taken a mechanistic approach to this problem. The premise is that sediment motion results from momentum transfer to particles from the fluid; therefore, the transport distance of sediment resulting from a storm should be related to the integrated fluid momentum ("impulse") of the flood. We tracked the motion of thousands of radio-tagged pebbles in the Luquillo Mountains, where cobbles and boulders are mobilized a dozen times a year due to frequent and large storms. Results show that the flood impulse is a good predictor of pebble transport, and also reveal the rate at which particles sort themselves out by size moving downstream.
The impulse framework provides a mechanistic basis for understanding how storms drive erosion, and should be broadly applicable to other systems where hydrologic gage data can be used to predict coarse sediment transport rates for gaged catchments in other areas. If the characteristic flood magnitude and intermittency of a given river could be assumed to be reasonably constant, one could even estimate cobble and boulder travel distances over geologic timescales. This could provide one way to estimate the residence time of pebbles in a river, if their provenance was known. Results show how complex hydrology can be reduced to a simple treatment to predict sediment transport rate in mountain streams, connecting the event scale to scales of landscape evolution.

Tracing sediments with RFID in the Rio Mameyes.

Sorting out the effects of storms on landscapes in Luquillo
(203 KB pdf)
A PDF version of this article.