Researchers Set a Rainforest to Bake 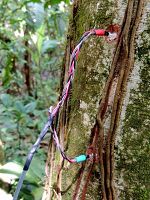 The world’s rainforests absorb 30 percent of human-produced carbon dioxide. Plants take up the CO2 through photosynthesis and release it through their leaves, stems, and roots via respiration. Researchers use scientific models to predict how carbon absorption will change with rising temperatures, but it’s not easy to know because such temperature hikes have never happened in human history. Global climate change is, after all, unprecedented.

That’s why, in the first study of its kind, a team of researchers led by Tana Wood from the USDA Forest Service and the International Institute of Tropical Forestry is manually heating up El Yunque National Forest in Puerto Rico by 7°F, a number that scientists think could realistically happen in the next century. The goal is to see if photosynthesis will slow. “It may have a temperature threshold,” says Wood. Researchers are looking at whether higher temperatures may hinder a plant’s photosynthesis by closing its stomates (tiny pores under the surface of a plant’s leaves that take in carbon) or whether plants are able to adapt to increased temperatures over time. Wood and her team are collecting carbon data in the soil and the roots to see what will happen when current high temperatures become the new norm.

That’s why researchers are warming three 130-square-foot hexagonal structures (about the size of large trampolines), while leaving three sites with the same infrastructure unwarmed for control. Using six infrared heaters supported by metal posts, the understory plants and soil are heated while scientists collect data on photosynthesis and plant respiration.

The Yunque rainforest is the ideal venue for the experiment, says Wood, because Puerto Rico has many first-world perks, like support from federal agencies and nearly a hundred years of research already done in the area. (Another plus is a lack of venomous snakes.) That doesn’t mean that the project hasn’t come with its share of issues. Wood admits that she didn’t appreciate the difficulty of installing a heating system of this magnitude in the middle of a damp, sloping rainforest full of indigenous creatures. Mold grew on the equipment, and ants got into the air lines used to measure soil respiration. Researchers fought a continuous battle against rust on their metal equipment. Plus, she says, “The control panels each weigh 200 pounds and took five construction workers to carry into the forest”—all by hand. The project also required a lot of electricity; one of Wood’s biggest concerns was blowing out the power grid in a neighboring town.

Despite initial difficulties, thus far the heating system has held up and the plots are warming as planned. The initial two-year study may provide much-needed data that scientists can use in future climate models; researchers hope to continue the project for years to come to look at more long-term impacts on plants.

While this is the first experiment to actually heat up the rainforest, many other climate scientists are looking at the effects of warming on this fragile ecosystem. According to Lara Kueppers, a research scientist in the Climate Sciences department at Lawrence Berkeley National Laboratory in Berkeley, California, we already know that warmer temperatures can tax trees because during periods of temporary warming like El Nino (which naturally causes warm, dry conditions in much of the tropics), the trees give off volatile organic chemicals, indicating that they're overburdened.

Such stress can lead to unfortunate side effects. “As air temperature increases, it can increase the amount of water that plants need to maintain growth,” Kueppers says. Counterintuitively, rainforests could undergo drought stress. Warming can also impact plants’ metabolic processes, making it harder for trees to take in carbon and stash it in their trunks. As temperatures increase, trees may store less carbon and expel larger amounts back into the atmosphere through higher plant respiration.

That’s bad news for humanity, but Wood and her team are doing their best to bring as much certainty as possible to an unpredictable future.