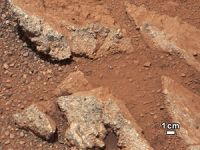 Researchers used the shape of rounded martian pebbles to extrapolate how far they must have traveled down an ancient riverbed.

Reconstructing the transport history of pebbles on Mars.

Image: Researchers used the shape of rounded martian pebbles to extrapolate how far they must have traveled down an ancient riverbed. [Click image to enlarge]

While new evidence suggests that Mars may harbor a tiny amount of liquid water, it exists today as a largely cold and arid planet. Three billion years ago, however, the situation may have been much different.

In 2012 the Mars Curiosity rover beamed images back to Earth containing some of the most concrete evidence that water once flowed in abundance on the planet. Small, remarkably round and smooth pebbles suggested that an ancient riverbed had once carried these rocks and abraded them as they traveled.

To Douglas Jerolmack, a geophysicist at the University of Pennsylvania, and his collaborator Gábor Domokos, a mathematician at Budapest University of Technology and Economics, Curiosity's findings raised a fundamental geological question: Can we use shape alone to interpret the transport history of river pebbles — on Mars, Earth or any planet?

See the full story at http://www.upenn.edu/pennnews/news/pebbles-mars-likely-traveled-tens-miles-down-riverbed-penn-study-finds