Landscape Evolution and Nutrients in the Luquillo Critical Zone

Combining old-fashioned field work and the latest LiDAR images provides new insight into the evolution of the Luquillo Critical Zone.  Our recent work shows that many of the sudden increases in river gradient (knickpoints) previously identified along Luquillo’s rivers (Pike, 2010), are not due to changes in the lithologic resistance of the bedrock to erosion, but instead are unstable erosion waves that migrate upstream with time.
We found that knickpoints tend to be located at the same elevation, especially on the quartz diorite, where they also have the largest amplitude. Almost a century ago Lobeck (1922) noted that the island of Puerto Rico has large tracts of an upland relict landscape apparently made of former wave-cut platforms surrounding isolated mountain peaks. We carried out a DEM extraction of these platforms and found that, around the Luquillo Mountains, the most extensive one stands at the same elevation (~600 m) as many of the largest knickpoints. This strongly suggests that the knickpoints/erosion waves are a transient signal of increased erosion following the uplift of the wave-cut platform. We quantified the gradient in erosion rates induced by the passage of these waves of erosion using cosmogenic 10Be produced in river- borne quartz. Catchment-averaged erosion rates are 2-3 times higher below the knickpoints.  The knickpoints thus separate a more-slowly eroding upland, where streams are transport-limited and where deep saprolites have developed, from lower, steeper, detachment-limited reaches surrounded by slopes with thinner saprolite. This finding has important implications for nutrient availability and vegetation zonation.
Further work has been undertaken to date this episode of uplift, estimated at 2-3 My, since this event considerably altered the climate of the Luquillo Mountains, bringing the peaks from elevations of ~500 m to their modern height of 1170 m, and allowing for the formation of the forest belts that we observe today. 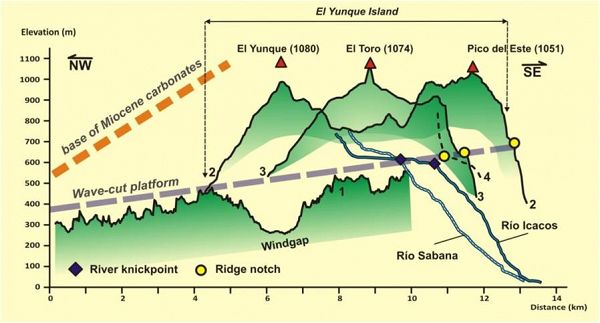 Correlation between the elevation of the former wave-cut platform and the knickpoints on the rivers flowing over the quartz diorite (Río Sabana and Río Icacos).

Correlation between the elevation of the former wave-cut platform and the knickpoints on the rivers flowing over the quartz diorite (Río Sabana and Río Icacos).

Landscape Evolution and Nutrients in the Luquillo Critical Zone
(217 KB pdf)
PDF version of this article.