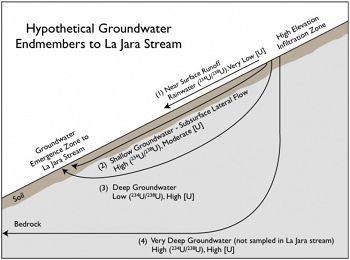 Uranium-series isotopes are emerging as a tool to characterize weathering and soil forming processes in the Critical Zone. This study seeks to understand the behavior of U-series isotopes during chemical weathering and soil formation in the semi-arid and lithologically complex volcanic terrain (rhyolitic volcaniclastics and tuff) of the Valles Caldera, New Mexico (USA). A comprehensive set of samples from the Jemez River Basin Critical Zone Observatory, including bedrock, soils, dust, soil sequential extracts, soil pore water, spring water, and stream water, was systematically investigated. (234U/238U) values measured in four soil profiles ranged from 0.90 to 1.56 and (230Th/238U) values ranged from 0.48 to 1.39. Significant 230Th enrichment in shallow soil profiles was interpreted as evidence of mixing with 230Th-enriched volcanic ash during soil formation. Evidence of past episodic mixing of volcanic ash in these soils suggests modeling soil formation using a mass balance approach without considering possible atmospheric inputs is problematic, and future applications of existing models in heterogeneous volcanic soils should be applied cautiously. Significant 234U enrichment in one soil profile was interpreted as evidence of addition of U to soils from 234U-enriched soil solutions. Soil sequential extraction confirms that most of the U is contained in organo-metal colloid and exchangeable forms in shallow soils of this profile.

U-series isotopes have also shown promise as a tracer of water residence time and mixing of different water sources. In this study, (234U/238U) ratios for dissolved U are used to trace seasonal variation in source water contributions to stream flow in a small (3.29 km2), headwater catchment within the Valles Caldera. Systematically lower (234U/238U) values (ranging from 1.7 to 2.8) were observed in dissolved U in spring and stream waters during snowmelt compared to dry seasons ((234U/238U) ranging from 1.9 to 3.1) in conjunction with greater contributions of deeper groundwater sources as suggested by major element tracers Cl and Si. The lower (234U/238U) values in deeper groundwater, in contrast to previous studies, were attributed to progressive depletion of easily-weathered 234U with increasing duration of water-rock interaction and increasing chemical dissolution. Further studies with more quantitative age tracers, such as 3H, could help to establish the influence of residence time on stream source waters' (234U/238U) values. If established, (234U/238U) could be a powerful tracer of water sources and residence time in stream waters at the catchment scale.