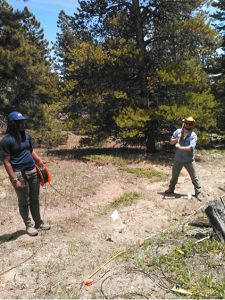 Seismic wave sources are triggered by a sledgehammer struck against the ground.

My research explores the ability of hillslopes in Gordon Gulch to transmit water. Water typically moves through porous matrices and/or fractures in rock, and hypotheses suggest that the north- and south-facing slopes of Gordon Gulch have different subsurface architecture and different hydraulic conductivities. We use boreholes to examine fracturing in bedrock and saprolite, and seismic refraction to assess whether there is directional dependence of fractures. Using these data, we can compare the characteristics of fracturing (i.e. strike, dip, frequency, aperture), the degree of weathering, and the depth to geologic contacts.

Image: Seismic wave sources are triggered by a sledgehammer struck against the ground.