Why should we care about quartz?

Quartz is beautiful. It shimmers in light and its rainbow of colors have stoked the imagination of everyone from admirers seeking spiritual healing to young geoscientists. But most quartz on Earth does not look like the gorgeous minerals we admire. Most of its forms are lackluster, dull and not translucent. But quartz plays important roles in the Critical Zone. So, why should anyone care about quartz in the Critical Zone?

Quartz is derived from East Central German, ‘quarz’, which roughly translates to ‘hard’. And as its name implies, quartz is hard! On the Mohs hardness scale, quartz is a 7 out of 10. This is harder than many natural and human-made materials like brick and glass, but it is not as hard as titanium or diamonds. The hardness of quartz is derived from its atomic mineral structure. Quartz is a framework silicate mineral, which are minerals composed of oxygen and silicon at a ratio of two oxygen per one silicon atom. The strength of the framework silicates is that oxygen and silicon atom are all connected in a network of strong bonds. This network structure is why quartz breaks with no clear planes of cleavage, called conchoidal fracture, like broken glass.

Image of conchoidal fractured quartz in a conglomerate rock

Although generally colorless due to its predominately silicon and oxygen composition, quartz can exist in a wide array of colors because of impurities. Amethyst (a purple quartz), rose quartz (pink), red quartz, and citrine (a pale yellow to brown quartz) owe their fabulous hues to impurities of iron, manganese, or titanium. Milky quartz gained its opaque characteristics from trapped gases and liquids. Smoky quartz can range from black to dark gray due to impurities of free silicon, not bonded to other oxygen and silicon.

Quartz is important for the Critical Zone because of its composition and distribution. Quartz is the second most common mineral in the Earth’s crust, right after feldspars. Because quartz is resistant to weathering, it often is one of the last minerals to dissolve. Sand and gravel sized pieces of quartz act as a ‘skeleton’ for soil, providing porosity for water to infiltrate into soils. Soils with high amounts of clays have trouble with slow infiltration rates of water entering soil compared to soils with high amounts of sand. However, soils with high amounts of sand store less plant available water than soils with more silt and clay (learn more from the University of Illinois and Natural Resources Conservation Service here).

Although quartz is more resistant to weathering than many other minerals, it still weathers with many impacts on plants and soils. Dissolved silica from quartz and other silicate minerals is used by some plants for structural tissues. As an example, rice accumulates silica to strengthen its stem (Lanning, 1963). Dissolved silica also can affect soils. New minerals, such as opal or kaolinite, can form from dissolved silica. The kaolinite can act as a surface for adsorption of compounds like organic matter or metals. Opal can act as a strong binder and glue soil particles together.

A downside of having soils dominant in quartz is that its silicon and oxygen structure does not provide other elements essential for plants. Feldspars have more essential nutrients like calcium, potassium, and magnesium for plants than quartz. Pure quartz generally only provides silica and trace amounts of iron, thus, making it a poor substrate for plants to grow on. Only very tough and hardy plants capable of scrounging for nutrients directly from other minerals or relying heavily on atmospheric deposition of nutrients are able to live in the nutrient poor soils derived from predominantly quartz. Think of the hardy plants that can live on quartz-rich sand dunes on beaches along the mid-Atlantic coast of the United States.

One of the most important things about quartz is that if it is exposed at the surface of the Earth, it can tell us how long it has been enjoying the sunlight! When quartz is exposed to the sun, small amounts of oxygen and silicon in the quartz can be turned into beryllium and aluminum from high energy cosmic rays. We can date the exposure of a rock at the surface by counting how much beryllium accumulates (Learn more about it here). This technique has been used by Critical Zone scientists like Dr. Melissa Foster. In her study, Foster et al 2015, was able to use exposure of quartz to cosmic rays to determine that regolith (weathered bedrock) at Boulder Creek CZO was being produced at 3.8 cm of regolith per 1000 years. That is a pretty cool story that only quartz has told us!


While we may admire the beautiful, iridescent forms of quartz, let’s not forget it is also a key component of soil and holds many stories about the Critical Zone!

Have any questions about the Critical Zone? Send them our way at Askcriticalzone@gmail.com.

Image of conchoidal fractured quartz in a conglomerate rock 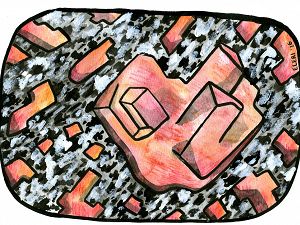 Why should anyone care about feldspars?

Natural faces and cut-polished facets of illustrious minerals shine with captivating opulence. These are commonly the minerals humans have touted as...