What can the watershed approach tell us about the Critical Zone?

What can the watershed approach tell us about the Critical Zone?


Creating a new tool is a defining moment in science. In astronomy, the development of the telescope allowed scientists to see new planets and moons. In biology, the microscope gave vision onto the previously unknown world of microorganisms. One of the most important developments for geosciences was the creation of the watershed-approach, which allows scientists to see how the materials of Earth work together on a large scale. A watershed is a physically bounded area that divides drainages. This means that if rain or snow falls in any part of a watershed, it will eventually drain into the same river. Using this approach, we can learn about how the Critical Zone functions as a whole system. That brings us to our question: What can the watershed approach tell us about the Critical Zone?

The watershed approach simplifies the landscape into a system of inputs, outputs, and storage pools. In other words, the watershed approach reduces the rocky terrain and belowground regolith into an earthen ‘bathtub’. Like a bathtub, water inputs from the ‘faucet’ can reside in the bathtub but eventually leave the bathtub, through the drain. In the watershed approach, all the input water from rain and snow will eventually find an exit: groundwater, streams and rivers, transpiration from a plant or evaporation. The watershed approach has been extensively applied by hydrologists to understand movement and storage of water in the Critical Zone. Hydrologists are now able to estimate what fraction of rain water will be stored in soil and ground water or immediately end up in a river for many watersheds.

Understanding water storage in the Critical Zone can be difficult since the storage capacity of ground water is not easy to measure and can fluctuate seasonally (Salve et al., 2012). In addition, fractured bedrock can create a leak in ‘bathtubs’ and causing additional outputs of water than the main stream and groundwater aquifer (Anderson et al., 2007). For this reason, the watershed approach can be a bit more complex than simple ‘bathtub’. It is crucial for hydrologists to make strong estimates of water storage in the Critical Zone because these water resources supply water for ecosystems, households, industrial processes, and agriculture to name a few. Moreover, it is essential for estimating flooding hazards for people living near rivers and streams (learn about river flooding near you from the USGS). 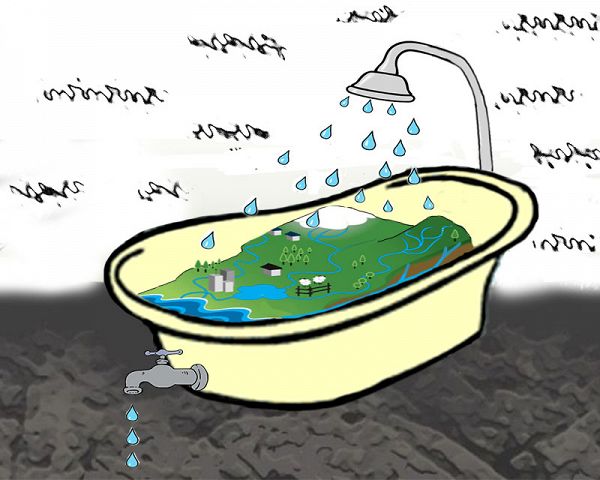 Figure 1. The watershed approach simplifies the landscape to a 'bath tub'. Like a bathtub, inputs from the atmosphere can reside in the watershed but eventually leaves by ground water, a stream, or evapotranspiration.

Unlike water however, inorganic elements have a variety of chemical interactions that affect their retention in a watershed. The accumulation of inorganic elements by plants can dramatically increase how long they are retained in the Critical Zone (Kraepiel et al., 2015). Also, electrochemical reactions with the surfaces of soil organic matter and minerals can increase retention. For example, lead is strongly bound to organic matter surfaces and therefore not found in considerable quantities in stream water. Pollutant lead from the 1900’s is still primarily retained in the forest soils at Shale Hills CZO (Ma et al., 2014) and Hubbard Brook LTER (Johnson et al., 1995). Lastly, the flow path the inorganic element takes can control the amount of time the element stays in the Critical Zone. Movement by overland flow is much faster than leaching through the soil profile and transportation by groundwater to a stream or river (Anderson et al., 2007). In addition, connected pores through soil and regolith can increase the movement of compounds through the Critical Zone as well (Anderson et al., 2007)

The movement and storage of organic elements, like carbon and nitrogen, is difficult to estimate using the watershed approach. The difficulty is due to the many inputs and outputs that are rapid and quite variable spatially and with time. For example, the emission of CO2 from soil is dependent on temperature, moisture, type of soil organic matter, and types of decomposers among other variables. This limits scientists’ ability to estimate carbon emissions across a watershed and throughout the year. However, continuous measurements of temperature, moisture, soil organic matter, and microorganisms can help refine estimates of CO2 loss from the Critical Zone. Combining CO2 losses to the atmosphere with estimates of carbon moving in ground water and streams, it is possible to use the watershed approach to determine a carbon budget.

The watershed approach is utilized at many of the CZOs such as Boulder Creek CZO, Catalina-Jemez CZO, Luquillo CZO, Shale Hills CZO, and Southern Sierra CZO. This is also utilized by many National Ecological Observatory Network and Long Term Ecological Research sites globally.


Learn more about Your Own Watershed from the US Geological Survey or model water movement in your own watershed using a simple model or an advanced model created by the Stroud Water Research Center.

Discover more about Watershed Management from the US Environmental Protection Agency (EPA) and US Forest Service. Also, check out how the US EPA uses the watershed approach to understand human impacts on U.S. waterways.


Have any questions swirling in your noodle about the rock, soil, water, fauna, or flora of the Critical Zone? Send them our way at Askcriticalzone@gmail.com.

Figure 1. The watershed approach simplifies the landscape to a 'bath tub'. Like a bathtub, inputs from the atmosphere can reside in the watershed but eventually leaves by ground water, a stream, or evapotranspiration.