Salmonids in Northern California Rivers, to be or not to be?

Although not as fuzzy as the now extinct California Grizzly bear (Ursus arctos californicus), salmonids (fish of the salmonidae family like salmon and trout) are arguably an equally emblematic animal of the state of California. Unfortunately, the past few centuries have been tough for the native salmonids populations of Northern California and they may soon share the same fate as the California Grizzly. Steelhead trout (Oncorhynchus mykiss), Chinook salmon (Oncorhynchus tshawytscha), and Coho Salmon (Oncorhynchus kisutch) populations have been long dependent on human intervention due to overfishing, river damming, and other human made changes to their habitat (Moyle et al., 2008). Despite continued efforts to support populations of Chinook and Coho salmon through captive breeding and stricter fishing regulations, they face an uncertain future due to a changing climate. 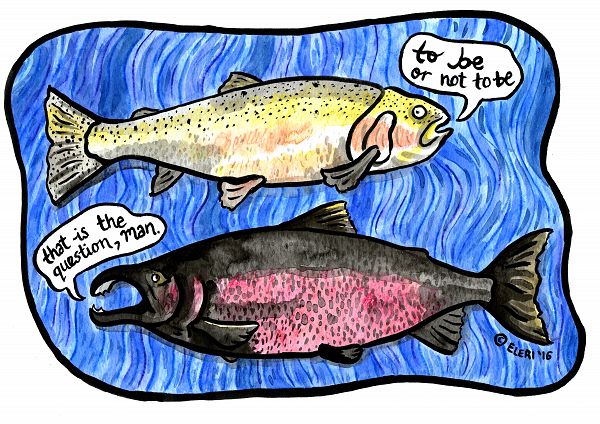 Image 1: The California fish conundrum of Steelhead trout (Oncorhynchus mykiss) and Chinook salmon (Oncorhynchus tshawytscha). The trout says "To be or not to be?" and the salmon replies, "That is the question, man." Illustration by Eleri Mai Harris


Despite recent El Nino-Southern Oscilliation providing long-needed precipitation, California remains in the midst of one of the worst droughts on record. Withered and dying plants are a common sight in the parched areas of Central and Southern California. With the focus fixed on Central Valley farmers, it is easy to lose sight on vulnerable organisms that we see infrequently, particularly the fish of Northern California. The delta smelt (Hypomesus transpacificus) has been the center of attention over the past few decades, pitting farmers against environmentalists in the use of water for ecological purposes. However, it seems the battle to save the delta smelt may be lost as recent historical, record-breaking drought conditions have put them on track for extinction (see National Geographic Article). The aquatic ecosystems home to Chinook salmon and steelhead trout in northern California have also been impacted, but their future in drying rivers and ponds is far more complex than simply water availability.

Chinook and Coho salmon and steelhead trout are sensitive to water conditions but they can exert some controls on their ecosystem. They prefer cold waters and will actively seek refuge from warm waters (Nielsen et al 1994). In addition to the temperature, the insects and algae living in the water can also impact the suitability of water bodies for salmonids. Dr. Mary Power at the University of California, Berkeley and her colleagues have been studying the aquatic ecosystems of the Eel River Critical Zone Observatory. Her research along with studies of others has shown that both winter and summer flows control river food chains, controlling the availability of food for steelhead trout (Power et al., 2008). In years with bed scouring winter floods and normal summer baseflows, trout in the Eel River were well fed. The scour eliminated large armored insects (grazing Caddisflies) and released edible algae, which in turn fed fast-growing, soft-bodied insects (like Mayflies) that, unlike the armored Caddisflies, are good prey for fish. After drought winters without flood scour, many large armored grazing Caddisflies survive, mow down algae, and reduce edible insects for the trout.

With climate change predicted to change precipitation patterns in California, summer droughts may be the knockout punch for salmonids. “The worst case, however, is when flood years trigger big algal blooms, but very low flow summers prevent it from feeding fish. Neither fish nor edible algae can tolerate the hot stagnant conditions that are set up when severe drought and water extraction for marijuana cultivation are combined.” Dr. Power says. If edible algae bloom in early summer, but die as flows go below critical in late summer, cyanobacteria that tolerate the hot stagnant pools absorb nutrients the dying algae release, and proliferate (Power et al 2015). These blooms of potentially toxic cyanobacteria have been linked to a number of dog deaths in the Eel and Russian Rivers. To Dr. Power, this is a double whammy: “It’s not salmon or no salmon, it’s salmon or toxic cyanobacteria” in the rivers of Northern California.

In spite of these problems, Chinook, Coho and Steelhead populations appear to be holding on (Moyle, 2008). The debate over water allotment still rages on with farmers and environmentalists struggling to find a happy agreement. Continued study of the salmonids in Northern California is needed to demonstrate if they are set for a comeback or going the way of the California Grizzly bear.

Image 1: The California fish conundrum of Steelhead trout (Oncorhynchus mykiss) and Chinook salmon (Oncorhynchus tshawytscha). The trout says "To be or not to be?" and the salmon replies, "That is the question, man." Illustration by Eleri Mai Harris