Many of us are content with considering the cement and asphalt that blanket our sidewalks and roadways as solid earth, our terra firma. However, the depth to actual solid, unweathered bedrock can range within a few feet to hundreds of feet. The unconsolidated material (commonly referred to as regolith) and heavily weathered bedrock (also called saprolite) is physically and chemically different from unaltered bedrock. This might seem trivial in day to day life, but solid bedrock is very important to those who live in areas prone to sinkholes, landslides, and earthquake liquefaction. Unfortunately, the depth to bedrock is a complicated question and has many geological ramifications beyond a sudden sinkhole gobbling your car. 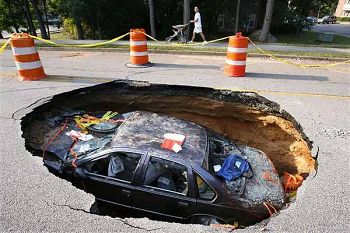 Figure 1. An automobile fell into a sinkhole in Gwinnett County, Georgia. Photo by Vino Wong. 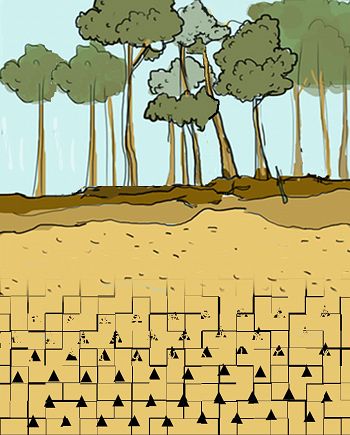 Figure 2. A cross-section of the Critical Zone, from the top of the vegetation down to the unweathered bedrock is shown.

The Critical Zone in colder areas can be controlled by how bedrock and water interacts with temperature. Riebe et al., (2016) have noted that the depth at which temperature affects the bedrock may be an alternative way to determine the depth of the Critical Zone. Their reasoning is that temperature can control how materials in the Critical Zone behave. For example, when the temperature begins to drop, water freezing can affect bedrock. When water freezes, it expands in volume, acting as atomic scale wedges that damages and fractures the rock. This cold climate process is commonly referred to as frost-cracking, and it leads to cracks and fractures in the bedrock (Graham et al., 2010; Anderson et al., 2013). Cracks and fractures accelerate bedrock weathering, creating a deeper Critical Zone.

In addition to mineralogy and climate, regional tectonic stresses (such as mountain building) and local tectonic stresses (ridge and valley formation) can create the fractures in bedrock. These cracks allow for water to seep deeper into the bedrock, accelerating the rate of weathering of the rock. The stresses on the bedrock are driven b  the shape of the landscape. St. Clair et al (2015) studied the effect of bedrock on depth of the Critical Zone at the Calhoun, Boulder Creek, and Christina River Basin CZOs. The researchers observed that depth of Critical Zone was deeper up on slopes and shallower at the base of slopes, using seismic refraction (acoustic waves to detect bedrock) and electrical resistivity imaging (the movement of electric signals to measure the depth of water to detect bedrock).  Most surprisingly, St. Clair et al (2015) noted that fractures were driven by topography because of tectonic stresses from the landforms themselves! This means the depth of the Critical Zone is dependent on the shape of the landscape, where differences in stresses creates fractures in the bedrock. 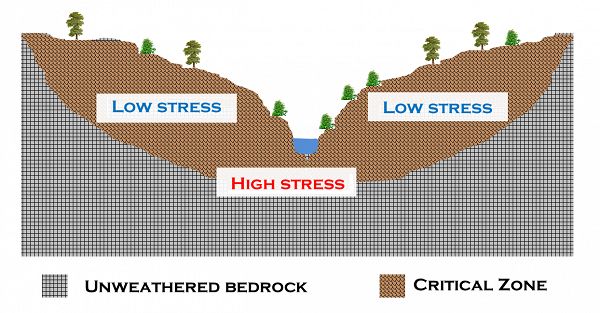 "It will be important to explicitly account for the physical and chemical role of lithology, which is challenging because subtle differences can have enormous effects on material properties" - W. Jesse Hahm, PhD student at Eel River CZO.


Future studies and models will need to combine geochemistry and geophysics to understand how they create the Critical Zone, together. Riebe et al., (2016) have identified four testable questions that will illuminate our knowledge on what controls Critical Zone depth. Each hypothesis seeks to link the chemical and physical changes that occur to bedrock. One of the project leaders, graduate student Jesse Hahm at Eel River CZO, describes these exciting research questions as “It will be important to explicitly account for the physical and chemical role of lithology, which is challenging because subtle differences can have enormous effects on material properties”. Thus, researchers have much to learn before we can definitively say what controls the depth of the Critical Zone.

Figure 1. An automobile fell into a sinkhole in Gwinnett County, Georgia. Photo by Vino Wong.

Figure 2. A cross-section of the Critical Zone, from the top of the vegetation down to the unweathered bedrock is shown.