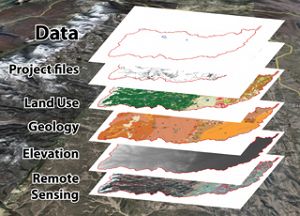 GIS (Geographic Information System) is a system of hardware and software used for storage, retrieval, mapping and analysis of spatial data.  GIS maps are made of layers, or collection of geographic objects that are similar.  For example, a layer could hold contain cities or streams.  To make a GIS map, one could add as many layers as needed.  A GIS layer may contain features or surfaces.  Features are geographic objects that can be represented by a polygon, line or point.   Examples of feature objects are rivers or countries.  Some data such as wind speed, temperature, rainfall and ocean depth have no distinct shape.  They are measurable values on the earth.  Such data are represented by raster, which is a matrix of identically sized square cells.  Each cell represents a unit of surface area and contains a measured value for that surface area.  A layer composed of raster make up a surface layer.