NSF special report: Let It Snow! The Science of Winter

Report reveals inner worlds of snow and winter, and their importance to humans and ecosystems 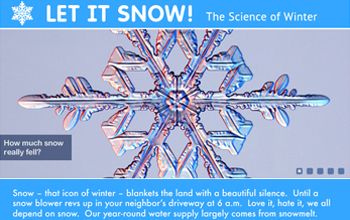 Love it, hate it, we all depend on snow. In many areas, the year-round water supply depends on snow.

Snow -- that icon of winter -- blankets the land with a beautiful silence. Love it or hate it, we all depend on snow. Our year-round water supply largely comes from snowmelt.

But we're not the only ones who need snow.

Species from microscopic fungi to 800-pound-moose require it as much, if not more. They survive the winter by living in nature's igloo: snow.

And spring's profusion of flowers? They're fertilized by nutrients in snow.

If you're planning to skate on a frozen lake or river this winter, ski on a snowy slope, or, when spring arrives, depend on snowmelt to fill your reservoir, you may need to think twice.

A view of the new winter

Winter is changing, becoming less like the cold seasons we may remember. The "new winter" has consequences far beyond December-to-March. It affects spring and summer, too, including plants' flowering dates -- and species such as hummingbirds that depend on precision flowering times for nectar.

In celebration of snow and winter as we know it, and in a look at what winter may be like in the future, the National Science Foundation (NSF) has launched a new special report: Let It Snow! The Science of Winter.

Grants from these areas fund research on subjects as diverse as measuring snowfall; tracking snowstorm "bombs," as whiteouts are known in meteorology; studying animals and plants that live beneath the snow in an ecosystem called the subnivian; searching for snowmelt, or "white gold"; and the bane of winter -- dust from the atmosphere that causes snow to melt before its time.

Love it, hate it, we all depend on snow. In many areas, the year-round water supply depends on snow.