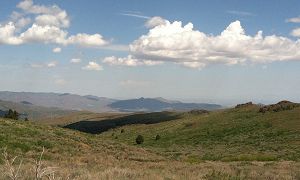 Organic Carbon:  The Key Variable in a Changing Climate.

Details for this Resource

Tracking Snow:  Measuring Nature’s Water Reservoir.  The Reynolds Creek Experimental Watershed has been at the forefront of snow measurement since the infancy of snow science.  Danny Marks, a snow hydrologist, has helped develop instrumentation that is used to measure the snowpack all across the Western U.S.  In the video, he explains the history of snow measurement at Reynolds Creek and why it is important to know how much snow has fallen in any given winter.

Organic Carbon:  The Key Variable in a Changing Climate.  The National Science Foundation Reynolds Creek Critical Zone Observatory was established to better understand organic carbon in sagebrush steppe ecosystems. As our climate changes, sagebrush steppe ecosystems are going to change as well.  In the video, Dr. Marie-Anne de Graaff shares her research, which focuses on predicting these changes and how they could affect this ecosystem’s ability to help sequester carbon from the atmosphere.

Predicting Soil Thickness:  Anywhere on a Landscape.  What if you could predict how thick the soil was anywhere in a vast ecosystem? Nick Patton has been developing a model to do just that. Knowing a soil’s thickness is important for understanding how much carbon, nitrogen, and other nutrients are stored in soil. In the video, Nick explains how he conducts his research and how it is a game changer for soil science.

CORE Sites:  The Most Advanced Ecosystem Measurements Anywhere.  Reynolds Creek is home to five CORE sites. These CORE sites are heavily instrumented areas carefully distributed across the climatic and elevation gradients of the Reynolds Creek watershed. They provide detailed datasets which scientists use to create models of sagebrush steppe ecosystems.  These models are then used to help make predictions about similar ecosystems in other areas of the U.S and the world.  In the video, Dr. Aaron Fellows explains the types of measurements made at CORE sites and why making such detailed measurements of sagebrush steppe ecosystems is helpful to all scientists.