Where do trees get their water?

Maintaining moisture is a daily challenge for plants that live on land. Unlike animals, plants do not have the capability to run to the nearest stream or lake for rehydration. Desert plants are specifically adapted to withstand harsh conditions to stay wet. For example, the Welwitschia mirabilis is a true survivor of the desert and has been a constant resident in the Namib Desert for millions of years (Henschel and Seely, 2000). This "ugly" plant has evolved to live on less than 6 inches (15 cm) of rain and tolerate weeks at temperatures > 100 °f (> 35 °C) in a nearly dormant state. Welwitschia and other desert plants share a common desert strategy: shut down to prevent drying and wait for rain. And when it does rain, desert plants use their shallow root systems to absorb as much water as possible. But not all plants are adapted to drought conditions. Without a constant supply of water, many plants, such as trees, could be forced to shed their leaves, especially during hot, dry weather. That brings us to the question of interest: Where do trees get their water? 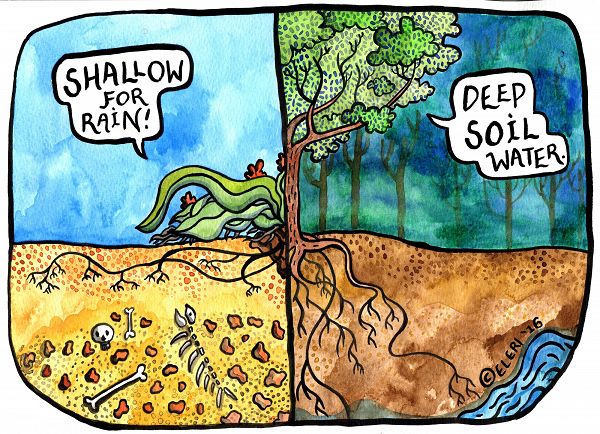 Compared to desert survivors, trees are seemingly less prepared to ward off the effects of a drought. Each of their leaves needs a constant supply of water for producing sugars via photosynthesis, to regulate their cellular chemistry, and to transport mineral nutrients and sugars with the rest of the tree. Trees and forests generally occur in temperate and tropical climates where precipitation exceeds 100 cm per year (40 inches per year), although forests can grow in drier climates. Trees obtain their water from their extensive root systems. In forests across the world, the majority of tree roots are within the first 20 inches (50 cm) of the soil (Jackson et al., 1996). The reason behind this phenomenon is simple: unless there is a nearby stream or groundwater is close enough to the surface to be accessed by the roots, precipitation from above is the easier to access. Thus, rain and melting snow is the major source of water used by trees. We know this is true beyond just reasoning, it is actually possible to determine where trees are getting their water by the molecular nature of the water in their leaves and vascular tissues.


Measuring stable isotopes in water has been a very effective technique for learning where water moves in the environment. The basis of water stable isotopes is that its components, hydrogen and oxygen, do not all weigh the same. Hydrogen is generally a lone proton, but it has an isotope, deuterium is a proton and neutron. Similarly for oxygen, instead of only having 8 protons and 8 neutrons, oxygen can have 9 or 10 neutrons. The reason these are considered stable isotopes rather than radioactive isotopes, is that they do not lose their extra neutrons with time. The combination of hydrogen and oxygen creates water with different weights, but they behave the same and plants are unable to detect differences. What is brilliant about this technique is that different waters can have different isotope compositions, which allows researchers to determine the source of water.


Dr. Katie Gaines, a recent PhD recipient from the Pennsylvania State University, studied the source of waters in northern hardwood tree species at the Shale Hills Critical Zone Observatory using stable isotope ratios of water. In her study, Dr. Gaines observed oak (Quercus spp.), hickory (Carya spp), and maple (Acer spp.) were primarily utilizing water held in the top 12 inches (30 cm) of the soil (Gaines et al., 2015). In addition, the isotopic signature of the water within the trees closely resembled that of summer precipitation. However, Dr. Gaines also found that oak and hickory were using a much deeper soil water and water ‘tightly-bound’ to surfaces that require more effort to access.


Although trees generally use water near the soil surface, tree roots are able to grow deeper into soil and even weathered bedrock (regolith) in their search for water and physical support. For example, in a study conducted in the Amazon forest of Brazil, tree and grass roots were abundantly found 26 feet (8 meters) into the deeply weathered soil profile (Nepstad et al., 1994). What is more surprising was the abundance of tree roots down to 60 feet (18 meters)! Of course, this depth of rooting varies with the physiology of the tree and the depth of the soil and regolith.


You can learn more about the movement of water into plants at the USGS website: