What is happening to coastal groundwater?

Xuan Yu in Adventures in the Critical Zone

What is happening to coastal groundwater?

By: Xuan Yu and Justin Richardson

As a Delawarean, it is nearly tradition for friends and colleagues to spend their summer weekends and vacation at the beach, to enjoy the toasty sun and warm ocean water. It is a dream for many people to have the ocean as a neighbor, living on a calm sandy beach or rocky shoreline. Unfortunately for many parts of the United States, seawater is becoming an uninvited guest, intruding on belowground water sources many people depend on. It is unclear if this problem will spread or can be prevented. So, is it worth investing large amounts of federal and state funds for well installation and instrument measurement? What is happening to coastal groundwater? 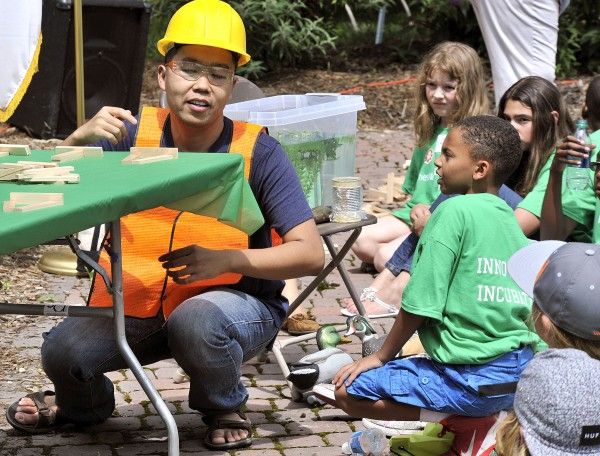 To guarantee continuous fresh tap water, it is important for engineering and geoscientists to monitor the intrusion of seawater. The Delaware Geological Survey has developed an observation network generating approximately 52, 600 daily temperature and 5700 specific conductance records, which monitors groundwater quality. Delaware’s groundwater resource is threatened by increasing demand from agriculture and domestic use. Moreover the aquifers in Delaware are vulnerable to salinization due to sea-level rise and ocean surges. Increasing evidences have shown that saltwater has crept into groundwater supplies along Delaware coast.

As an example, many supply wells in Cape May, NJ, have been abandoned due to excessive chloride contamination from seawater (Chesler, 2005). At Cape Canaveral Barrier Island Complex in Florida, model simulations have shown that 18 – 69 % of aquifers will be salinized by seawater in 2050 due to sea-level rise (Xiao et al. 2016). Thinking globally, this is also a growing problem in Asia. A studying using field measurements and model simulations suggested that inundated salt water by the Supertyphoons could contaminate a major aquifer in the Philippines with seawater for up to 10 years (Cardenas et al., 2015).  This could be major problem for coastal population, who rely on groundwater source for drinking, cleaning, and cooking! 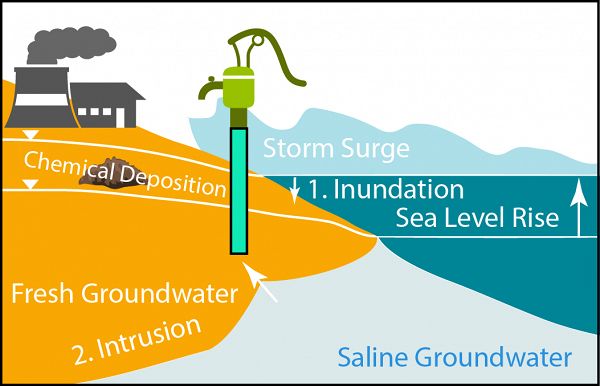 Figure 1. An illustration show some CZ processes that occur in a coastal environment. Chemical deposition of various pollutants from industrial sources can be affected during inundation from sea level rise or storm surge. Also, the intrusion of saline water into fresh ground water can affect water availability.

Movement of water near the ground’s surface will affect other coastal Critical Zone processes. For example, infiltrating seawater raises the chances of chemical exchange between land and ocean. Trace elements present in the soil may be mobilized to the surface due to rising water table or be released to the ocean. To ensure this process does not and cause a public health emergency, scientists monitor the chemical parameters and composition of groundwater.

In addition to people, the plants living in coastal environment can also be affected. The vegetated coastal Critical Zone plays an important role in carbon dynamics and erosion control (Leonardi et al., 2015). Salt marsh vegetation fixes atmospheric carbon, and a portion of that carbon is eventually buried in underlying sediments. Unfortunately, salt marshes are globally in decline, and their carbon sequestration potential is under threat. The loss of coastal vegetation can enhance erosion and further contribute to climate change (Mudd et al., 2009).
Coastal Critical Zone scientists have invested efforts to understand physical, chemical, and biological processes to better predict the impacts of environmental change on the coastal Critical Zone (Sawyer et al., 2016). In our recent study found that coastal landscape (i.g. ponds, dunes, barrier islands, and channels) has a strong impact on overwash and salinization processes, which should be considered in coastal land management practices (Yu et al., 2016). In near future, advance models and field monitoring network should be developed to improve our ability to predict, mitigate, and prevent the adverse effects of climate change on coastal groundwater quality.

You can learn more about Coastal Critical Zone processes at http://www.nature.com/scitable/knowledge/library/coastal-processes-and-beaches-26276621

Figure 1. An illustration show some CZ processes that occur in a coastal environment. Chemical deposition of various pollutants from industrial sources can be affected during inundation from sea level rise or storm surge. Also, the intrusion of saline water into fresh ground water can affect water availability.