What are clays and do they have a role in the Critical Zone?

There is a saying that big things come in small packages and few things fit this statement more than clays. Clays are important for many aspects of our daily lives, from the beige and red bricks of buildings to the ceramic dishes use to eat. But the true importance of clays comes from both their physical and chemical properties. Their microscopic scale allows them to form very compact structures in soil and their size creates massive surface area for chemical reactions. In addition, they can be charged, allowing them to interact with nutrients and chemical compounds. However, clays come in many different forms: they can be true clay minerals such as biotite or kaolinite, or they can be clay sized particles of quartz and feldspars. It seems that scientists have called many very different things clays and called clays by many other names. That leads us to two questions: What are clays and do they have a role in the Critical Zone?

A) The clay mineral vermiculite, commonly used for cleaning spills and in horticulture. Verimculite ‘books’ can be seen by an unaided eye. B) Clay-sized particles that require a scanning electron microscope to see.


Clays can also refer to a group of clay minerals, which consist of layers of aluminum and silicon sheets. Clay minerals are considered 1:1 if they have one of each type of sheet, or they can be 2:1 if they have two sheets of silicon and one sheet of aluminum. Clay minerals do not have to be less than 2 micrometers. Some clay minerals, such as vermiculite, can be seen in soils and often look like gold flakes. In igneous rocks, there can be biotite veins as wide as a car! However, many clay minerals are clay-sized because they are created by chemical weathering in soil.

Clay-sized particles and clay minerals play key roles in the movement of water and elements in the Critical Zone because of their very high surface area. One gram of clays has roughly 10,000 times more surface area than one gram of sand. In fact, one gram of clay has nearly twice as much surface area as two basketball courts (> 8000 square feet or > 430 square meters). This vast surface area allows for water and nutrients to remain in soil. The small spaces between clay minerals create tiny pores that hold on to water. Clays themselves can hold water and nutrient molecules stick to them, depending on the type of mineral because of electrical charges. Clay-sized quartz particles have very little surface charge while clay-sized vermiculite or montmorillonite, a swelling clay, can have thousands of times more surface charge to hold onto nutrients.

Meet Ray the Clay! Ray is a rounded piece of clay sporting a hat and sneakers. He stands by a soil profile holding a bag of nutrients and a cup of water.


Farmers and soil scientists are primarily interested in the clay content of their soils because it controls how water and elements move through soil. Clay-rich soils commonly move water very slowly because of the size of the pores between clay particles. This is important for keeping water in constructed ponds or preventing leaching of toxic compounds from clay-lined landfills.


Critical Zone scientists are looking to push beyond what clays can do for agriculture and engineering; some scientists are working to determine what they can tell us about the evolution of landscapes.  Anna Wade, a PhD student at Duke University, is using the type of clay mineral to determine if the clay fraction was created by erosion or chemical weathering. Using quantitative X-ray diffraction, Anna Wade is able to determine the composition of the clay fraction of the soil. She hopes to tie the presence or lack of kaolinite, a mineral derived from chemical weathering, as an indicator of the degree of weathering/erosion of soils at Calhoun CZO. This is particularly important as soils are forming on legacy deposits due to erosion. Come check out her presentation on her work at the Soil Science Society of America Fall Meeting in Tampa Florida (Wade et al., 2017).

Anna Wade examining the 'Tyger Stripes' of the B horizon in a soil profile at Calhoun CZO with her adviser, Dr. Dan Richter, watching her technique.


Anna Wade is not alone in the pursuit of applying clays to studying the Critical Zone. Dr. Paul Schroeder is a professor of Clay Mineralogy at the University of Georgia Athens and he has been examining clays in soils. According to Dr. Schroeder, "Clay science plays an important role in Critical Zone science as the future challenge is the development of a unified theory for Critical Zone evolution.". In particular, clays are central to how the Critical Zone is shaped, and how it will affect us as humans. He continues that clays are important for filtering percolating groundwater, important for roadways and foundations, and even has spiritual value to certain cultures (Schroeder 2016). We look forward to reading Dr. Paul Schroeders upcoming book “Clays in the Critical Zone”!

As scientists continue to expand our knowledge of the nanoscale world around us, we will gain a better appreciation for clay-sized particles and clay minerals in the Critical Zone. Although we often do think about it, our friend Ray the Clay will continue to do many jobs we rely upon.

A) The clay mineral vermiculite, commonly used for cleaning spills and in horticulture. Verimculite ‘books’ can be seen by an unaided eye. B) Clay-sized particles that require a scanning electron microscope to see.

Meet Ray the Clay! Ray is a rounded piece of clay sporting a hat and sneakers. He stands by a soil profile holding a bag of nutrients and a cup of water.

Anna Wade examining the 'Tyger Stripes' of the B horizon in a soil profile at Calhoun CZO with her adviser, Dr. Dan Richter, watching her technique. 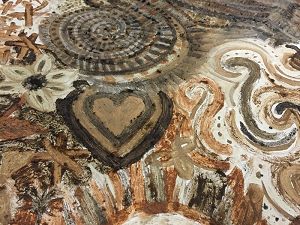 Why do soils look so different?

To celebrate the Food and Agriculture Organization’s 2015 International Year of Soils, we are going to explore the question: why do soils look...