How deep can water enter bedrock?

Bedrock is an unsung hero; it provides essential support for buildings and roads and produces gorgeous landscape features, like mountains and valleys. Bedrock is also important for the storage and movement of groundwater. After rain water percolates through the soil, it can become perched near the surface in the critical zone. This shallow groundwater can be close enough to the surface to be accessed by wells. Thus, shallow groundwater is a key resource for humans or near-surface critical zone processes like trees. But, will the water always be there? Does rock form a water-tight barrier? This brings us to our question: how deep can water enter bedrock? 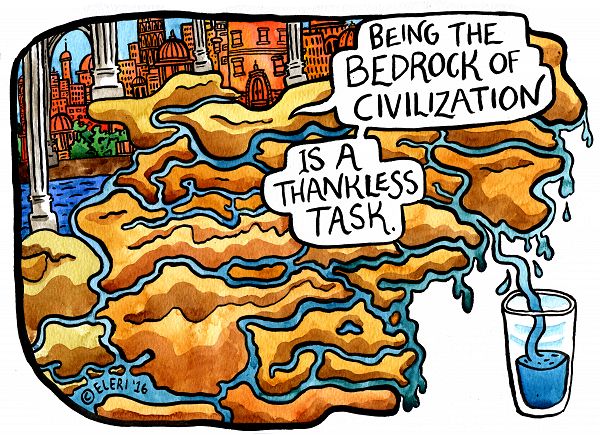 Image 1. Groundwater is known to supply our towns and cities with water. But groundwater can support life and cause chemical changes deep within bedrocks. A city scape is held up by a fractured bedrock with water moving through it draining into a drinking glass.


In the critical zone, rocks can have large and small fractures that allow water to enter the rock. One way these rock cracks can be formed is by root growth or the acids they release. In addition, the freeze-thaw cycle can push open cracks in rock. Water is denser as a liquid and can enter small cracks. Upon freezing, it becomes less dense and expands, widening the fractures in rock. The pushing and pulling of rock against each other by tectonics can create even larger fractures. These fissures in the bedrock can run thousands of feet deep and are a source of deep groundwater. Although deep groundwater is far from sunlight and nearly devoid of oxygen, it can be teeming with life. In a recent study by Sohlberg et al (2015), researchers found a diverse array of fungi living in deep groundwater at 2600 ft (798 m) deep!


Water molecules will enter any space they can physically fit. Rocks and materials that have a closely interlocking mineral matrix, such as metamorphic and igneous rocks, can strong prevent water movement (think of a granite table top). Rocks with space between the gains, such as coarse sedimentary rocks like sandstone, have higher porosity and permeability, and allow for water to flow through it. For example, water moves through sandstone ten thousand times faster than in shale (Mazor 2003). Nonetheless, water can still enter interlocked minerals.


One such example was illustrated by Assistant Professor Lixin Jin at the University of Texas at El Paso, who studied the movement of water into shale at the Shale Hills Critical Zone Observatory as a post-doctoral researcher. In her co-authored study (Brantley et al., 2013), they drilled into the bedrock at top of a ridge and bottom of a valley of central Pennsylvania to determine how deep water was penetrating into the shale bedrock and initiating chemical reactions. Using chemical and mineralogical analyses, they observed that at the top of ridges, oxygen sensitive mineral pyrite was being weathered by water infiltrating down to 76 feet (23 m) below the ground surface. Pyrite was being lost from the mineral matrix due to the oxidation of reduced iron and sulfur. However, at the bottom of the valley where the groundwater is shallower, water was only oxidizing minerals down to 26 feet (8 m) below the ground surface. This is the opposite of one might expect, but Dr. Jin suggests that water in the valley rock is more chemically evolved, reducing its capacity of dissolving more minerals.


If you are interested in your own groundwater, check out this cool tool developed by the USGS: http://maps.waterdata.usgs.gov/mapper/index.html


Have any questions swirling in your noodle about the rock, soil, water, fauna, or flora of the critical zone? Send them our way at Askcriticalzone@gmail.com.

Image 1. Groundwater is known to supply our towns and cities with water. But groundwater can support life and cause chemical changes deep within bedrocks. A city scape is held up by a fractured bedrock with water moving through it draining into a drinking glass.