Are all environments part of the Critical Zone? 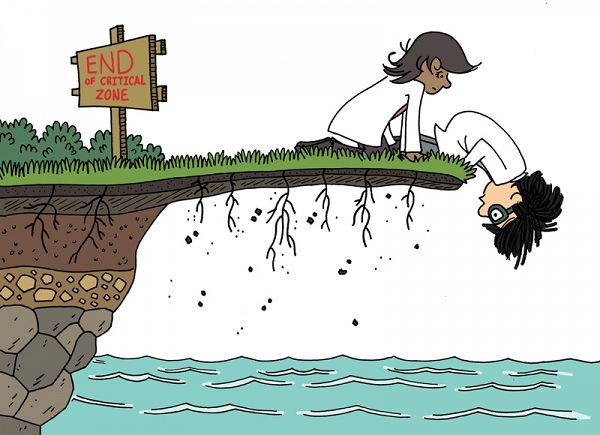 Image 1. Where does the Critical Zone end? Two researchers look under a ledge of land that extends out past a sign that reads “End of the Critical Zone” over a body of water. Illustration by Mathew New.


The Critical Zone Observatories (CZOs) have focused on environments that characterize the North American portion of Earth’s surface (White et al., 2015). The Boulder Creek, Catalina-Jemez, Reynolds Creek, and Southern Sierra CZOs explore mountainous environments that are the head waters for many important rivers. Eel River CZO investigates a coastal mountain environment. Shale Hills and Calhoun CZOs study examples of eastern forest environments. Intensively Managed Landscapes CZO tackles the tough job of characterizing the critical zone responsible for feeding the nation. Finally, the Luquillo CZO examines the tropical forest environment. However, this does not capture all of the different environments found in North America.


There are parts of the Critical Zone that may be a future focus for new CZOs. They are environments that generally support less life, particularly humans. Prime examples for future Critical Zone science are arctic environments. These environments are cold for the majority of the year and are home to unique cold-tolerant plants and animals. The continually cold temperatures in arctic environments suppress biological activity and chemical reactions. Dead plants that would normally decompose in warmer climates are preserved as peat and other organic-rich deposits. This can act as an important sink for carbon (Johnson et al., 2011). In addition, the limited precipitation reduces the rate of chemical weathering occurring (Foster and Vance, 2006). As climate change has already begun to increase temperatures and change precipitation patterns, it is increasingly important to understanding how extreme environments will respond. 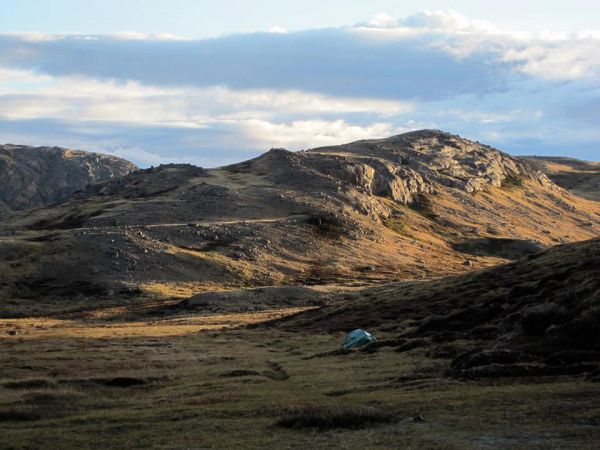 Image 2. The arctic environment (Greenland shown here) is cold and barren but home to unique plants and animals. Photo by Julia Bradley-Cook.


Water is a key sculptor of the Critical Zone, shaping landscapes as glaciers and weathering bedrock. Despite its vital role, aquatic environments like ponds, lakes, seas, and oceans have not been considered part of the Critical Zone. These large bodies of water function in a different manner than most terrestrial environments. Once fully submerged, processes like the exchange of energy and gases with the atmosphere, rooting and weathering by plants, and removal of material via erosion are fundamentally different. In addition, some Critical Zone scientists have noted that many aquatic and marine processes are not directly linked to the sustainability of terrestrial ecosystems. For these reasons, they are commonly not considered part of the Critical Zone.


Unfortunately, this leaves coastal scientists unsure if they can catch the wave of Critical Zone science. Many groups have included coastal systems like beaches, salt marshes, and mudflats as part of the Critical Zone, just more on the soggy ends of things. The National Research Council (2001) considered the land-ocean interface as part of the Critical Zone because it is home for many plant, animal, and human communities. Barrineau et al., (2015) noted that coastal systems can control deposition of fresh sediment which may become soil or a terrestrial ecosystem. As a prime example, Wilson (1987) found that after 7 years, beach sand in Londonderry Ireland had developed young soil horizons and after 31 years, the beach sands had accumulated concentrations of organic matter higher than older soils found in deserts. Thus, beach sands can develop into soils relatively fast. In addition, the destruction of coastal systems can result in the loss of soil and stored elements. Coastal sand dunes play a key role in protecting terrestrial ecosystems from storm surges created by tropical cyclones and serves as a unique location for burial-tolerant vegetation (Barrineau et al., 2015). 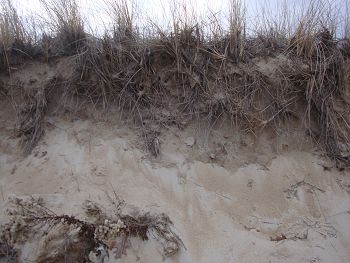 Image 3. A young soil forming from beach sand on Cape Cod, Massachusetts. With erosion exposing plant roots, it might be around much longer.


However, others have excluded coastal environments from the Critical Zone because of the dominance of lake and marine processes (White, 2012). For example, sandy beaches are dependent on deposition from the ocean and commonly are only temporarily in place. These ephemeral beaches are not around long enough to undergo weathering and soil formation necessary to sustain a terrestrial ecosystem. In addition, many coastal areas can be fully submerged due to fluctuations of lake- and sea-level, causing physical and chemical changes similar to lake and ocean sediments rather than other parts of the Critical Zone.


As Critical Zone scientists continue to develop their understanding of how the lithosphere, hydrosphere, biosphere, and atmosphere interact, we will inevitably have to determine which environments are part of the Critical Zone. Will inclusion of aquatic and marine systems expand our knowledge of how terrestrial ecosystems are sustained? There is an active debate on this topic and scientists are always open to revisit and retest hypotheses.


Leave us a comment below where should the boundary be or if there should even be a boundary for the Critical Zone!


Have any questions about the Critical Zone? Send them our way at Askcriticalzone@gmail.com.

Ashley GM (1998) "Where are we headed? "Soft" rock research into the new millennium.". Geological Society of America Abstract/Program 30, A-148

Image 1. Where does the Critical Zone end? Two researchers look under a ledge of land that extends out past a sign that reads “End of the Critical Zone” over a body of water. Illustration by Mathew New.

Image 2. The arctic environment (Greenland shown here) is cold and barren but home to unique plants and animals. Photo by Julia Bradley-Cook.

Image 3. A young soil forming from beach sand on Cape Cod, Massachusetts. With erosion exposing plant roots, it might be around much longer.