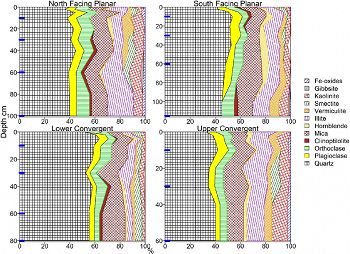 Mineral distribution with depth at the four pedons. The blue ticks show the depth of sensor/sampler installations.

Mineral distribution with depth at the four pedons. The blue ticks show the depth of sensor/sampler installations.

Predicting fluid biogeochemistry in the vadose zone is difficult because of time‐dependent variation in multiple controlling factors, such as temperature, moisture, and biological activity. Furthermore, soils are multicomponent, heterogeneous porous media where manifold reactions may be affecting solution chemistry. We postulated that ecosystem‐scale processes, such as carbon fixation and ecohydrologic partitioning, control subsurface biogeochemical reactions, including mineral weathering. To test this hypothesis, we applied a novel “instrumented pedon” research approach. Analysis of the data streams demonstrates the interactions between pulsed wetting events and biogeochemical processes in the soil profile, and along groundwater flow paths. Rapid wetting front propagation into dry soil resulted in a pulsed increase in CO2 partial pressure in deeper soil layers, whereas wetting front propagation into a premoistened soil profile showed the opposite effect. The apparent respiratory quotient (ARQ), calculated from CO2 and O2 fluxes, deviated from expected oxidative ratios particularly during soil wetting events. These deviations were correlated in time with pore water geochemical responses, revealing that a fraction of the respired CO2 was consumed locally in pulsed silicate weathering events that accompanied wetting‐front propagation. However, most of this CO2 was dissolved in the soil pore water and transported downgradient, and along the soil‐bedrock interface, where a portion of it was further consumed in silicate weathering reactions, and another portion was degassed to the atmosphere. These results highlight the tight coupling that exists between physical, biological, and chemical processes, on event time scales, during incremental co‐evolution of the critical zone, particularly in water‐limited systems.