Why Do Large‐Scale Land Surface Models Produce a Low Ratio of Transpiration to Evapotranspiration?

Earth System Models (ESMs) used for the Intergovernmental Panel on Climate Change (IPCC) climate projection generally produce a weaker ecosystem resilience to climate change as indicated from the ratio of transpiration (T) to evapotranspiration (ET) that is lower than field estimates. This may degrade the credibility of the climate projection by these ESMs and the modeled ecosystem responses to climate change. To interpret this model deficiency and provide guides for future model developments, we conducted virtual experiments using a more physically‐based computer model in a mountainous catchment. It turns out that more careful representation of lateral water flow and water vapor diffusion within the soil may enhance the modeled ecosystem resilience. Future models should include more advanced understandings of the water vapor diffusion from the rising/falling evaporating surface in the soil to the soil surface. Terrain‐driven lateral water flows spread out soil moisture to a wider range along hillslopes with an subrange (from the middle to upper slopes), where more water infiltrates into deeper soil for use by plants through root uptake. This implies that redistribution of precipitation through lateral water flow may enhance the water availability for plant growth and the ecosystem resilience to climate change in mountainous regions. 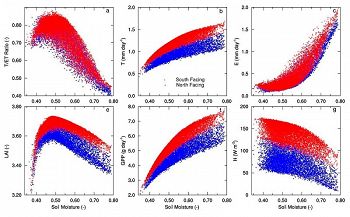 Most land surface models (LSMs) used in Earth System Models (ESMs) produce a lower ratio of transpiration (T) to evapotranspiration (ET) than field observations, degrading the credibility of ESM‐projected ecosystem responses and feedbacks to climate change. To interpret this model deficiency, we conducted a pair of model experiments using a three‐dimensional, process‐based ecohydrological model in a sub‐humid, mountainous catchment. One experiment (CTRL) describes lateral water flow, topographic shading, leaf dynamics, and water vapor diffusion in the soil, while the other (LSM‐Like) does not explicitly describe these processes to mimic a conventional LSM using artificially flattened terrain. Averaged over the catchment, CTRL produced a higher T/ET ratio (72%) than LSM‐Like (55%) and agreed better with an independent estimate (79.79±27 %) based on rainfall and streamwater isotopes. To discern the exact causes, we conducted additional model experiments, each reverting only one process described in CTRL to that of LSM‐Like. These experiments revealed that the enhanced T/ET ratio was mostly caused by lateral water flow and water vapor diffusion within the soil. In particular, terrain‐driven lateral water flows spread out soil moisture to a wider range along hillslopes with an optimum sub‐range from the middle to upper slopes, where evaporation (E) was more suppressed by the drier surface than T due to plant uptake of deep soil water, thereby enhancing T/ET. A more elaborate representation of water vapor diffusion from a dynamically changing evaporating surface to the height of the surface roughness length reduced E and increased the T/ET ratio.