Snow is melting earlier, and there is potential for greater evaporation as a result of warmer, drier conditions in semiarid mountain regions around the world. These changes combine to affect seasonal moisture availability on the landscape, which is essential to proper ecosystem function. This research used 34 years of satellite‐ and field‐based data that included three distinct droughts to show that forest activity, measured as the amount of carbon dioxide removed from the atmosphere, may decrease as a result of this scenario. This work has broad implications for global climate change since forests in seasonally snow‐covered areas currently contribute to mitigating carbon dioxide emissions. 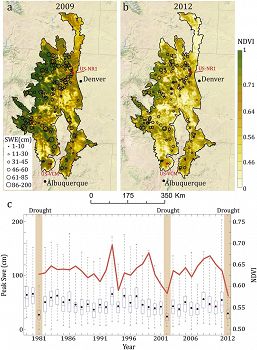 Future projections of declining snowpack and increasing potential evaporation are predicted to advance the timing of snowmelt in mountain ecosystems globally with unknown implications for snowmelt‐driven forest productivity. Accordingly, this study combined satellite‐ and tower‐based observations to investigate the forest productivity response to snowpack and potential evaporation variability between 1989 and 2012 throughout the Southern Rocky Mountain ecoregion, United States. Our results show that early and late season productivity were significantly and inversely related and that future shifts toward earlier and/or reduced snowmelt could decrease snowmelt water use efficiency and thus restrict productivity despite a longer growing season. This was explained by increasing snow aridity, which incorporated evaporative demand and snow water supply, and was modified by summer precipitation to determine total annual productivity. The combination of low snow accumulation and record high potential evaporation in 2012 resulted in the 34 year minimum ecosystem productivity that could be indicative of future conditions.