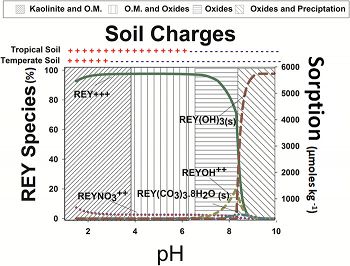 Rare earth elements (REY) are the lanthanide elements (Z = 57–71), which have an ever-growing occurrence in present-day industries, agriculture, and modern life. Consequently, environmental concentrations are expected to increase accordingly as a result of intensified utilization. Soils are an important sink for REY, yet little research has been conducted concerning activity, inputs, and lability in soil systems. This study evaluated the REY (lanthanides + yttrium) sorption and partition coefficients (Kd) in two broadly representative natural soils (A horizon), with contrasting mineralogy and organic character, formed under distinct environmental conditions: an Oxisol from Brazil and a Mollisol from the USA. Batch reactions of soils suspended in a background electrolyte solution of 5 μmoles kg−1 of Ca(NO3)2 at 1:100 solid to solution were reacted with 80 μmoles kg−1 REY added individually and in multi-REY competitive systems to evaluated adsorption after 3 h and 72 h over a wide pH range (from ca. 2 to 8). Results showed sorption was similar for all REY within each soil type when examined at the natural measured soil pH; Mollisol pH 6.85, Oxisol pH 4.35. However, REY sorption (by Kd) was nearly two-fold greater in the Mollisol compared to the Oxisol for the single REY experiments. Multi-REY competitive sorption reactions showed a decrease in Kd for both soils at 3 and 72 h, and to a greater extent for the Mollisol, indicating soil type had a strong effect on the sorption affinity of each REY. It was also observed that REY sorption increased from low to high pH (pH 2–8) in the Oxisol, and increased with pH from 2 up to the point zero charge (PZC) in the Mollisol, then stabilized. The varying REY Kd values from these two distinct and abundant soils, with and without REY competition, and over a range of pH are explained in terms of soil mineralogy (i.e., 2:1 clays in the Mollisol; oxides in the Oxisol) and organic matter content. Our findings show that soil characteristic controls sorption, precipitation, and cation exchange capacity, which are the key mechanisms for predicting REY fate and transport in the environment.