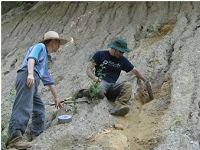 Between roughly 2 million years ago and 10,000 years ago, during the Pleistocene Epoch or “Ice Age,” massive glaciers swept across Illinois and other parts of the country. IML-CZO investigator Andrew Stumpf is studying the history of Pleistocene glaciations and their impacts on the land.

Stumpf, an Associate Quaternary Geologist at the Illinois State Geological Survey in the Prairie Research Institute, University of Illinois Urbana-Champaign, is contributing in two primary ways to the research program of the IML-CZO project. His first research focus is “to better understand how the Upper Sangamon River Basin (USRB) evolved through the most recent geologic time over the last 2.6 million years,” known as the Quaternary Period. Specifically, he and his research team are looking at how the present-day river system formed. Since the Laurentide Ice Sheet receded back to the north out of the USRB, approximately 20,000 years ago, the river system has continually changed in an effort to reach equilibrium with the natural- and anthropogenic-driven processes affecting it.

“Ongoing natural changes and the latest anthropogenic changes have significantly altered the postglacial landscape,” says Stumpf. “The amount of water moving across the land has fluctuated over time, and continued periods of erosion, sediment transport, and deposition in the river basin have caused shifts in the position of drainage channels. Today, both natural processes and anthropogenic impacts are working in tandem to affect their positions.”

The conversion of much of the natural Illinois landscape into cropland, predominantly corn and soybeans, has also greatly altered the landscape. According to Stumpf, “Land that was either forested and well drained or poorly-drained prairie has been converted in very short time—roughly 200 years—into tilled row cropland. Tile drainage has been successful in reclaiming flood-prone lands and has significantly altered the natural hydrologic system.”

He observed that tile drainage pipe is typically installed at a depth of 3 to 6 feet, where it intercepts the infiltrating rainwater and effectively lowers the water table. Infiltrating water that previously reached the lower stratum is now directed through tiles, concentrating runoff along a series of dug ditches. This change in farming practice has reduced the time that water is held in the soil and has increased the rate of runoff, which can exacerbate erosion and affect land that did not flood in the past.

Stumpf’s second research focus in the IML-CZO project involves examining geochemical variations in the “critical zone,” which was first defined by the U.S. National Research Council (NRC, 2001) as the “heterogeneous, near-surface environment in which complex interactions involving rock, soil, water, air, and living organisms regulate the natural habitat and determine the availability of life-sustaining resources;” (p. 37).

“The lower part of the critical zone includes extended intervals of sediment left behind by the glaciers, known by geologists as glacial till” explains Stumpf. “In the river basin, till has a distinctive geochemistry that is influenced by the incorporation of minerals from sedimentary bedrock (shale and dolomite) found in northeastern Illinois, and by far-traveled material ‘erratics’ carried from igneous and metamorphic bedrock outcropping further north on the Canadian Shield.”

However, he adds, “Farmland soil is formed by the physical and chemical weathering of till and the overlying windblown silt and sand, or loess, which is geochemically much different. Soil-forming processes have caused minerals to break down and, in some cases, recrystallize into different minerals or chemical structures,” says Stumpf. “Iron and manganese minerals are common in the soil, and when exposed to oxygen or oxygenated water, they turn orange and brown, giving soil its characteristic color or hue. Plants, a component of the critical zone, interact with the soil through their root systems and absorb certain elements that are concentrated in the vegetative tissue.”

One example is Achillea millefolium, or common yarrow, which has been shown to accumulate zinc. He added, “The presence of certain elements in plants can be useful in predicting the composition or health of the soil.”

Stumpf’s aim is to use his research to inform farmers, land managers, policy makers, and other members of the public about issues that can affect them. Providing outreach and education to these groups is also a focus of the IML-CZO project.

“Understanding how landscapes evolve over time, leading to the formation of soil—soil is the backbone of precision agriculture—is imperative for modeling the interconnected food, energy, and water systems. Competition for natural resources, such as water for food and energy production, can influence water quality for food production and increase competition for available resources (land, nutrients, and water) between biofuel and food production,” says Stumpf. He hopes to apply his expertise to help inform farmers, decision makers, stakeholders, and the public so they can address these complex socio-environmental issues from an informed perspective. 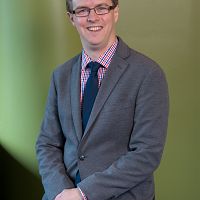 18 Mar 2016 - Farming in the Midwest provides food and energy for the rest of the United States and even other parts of the world but some of the agricultural... 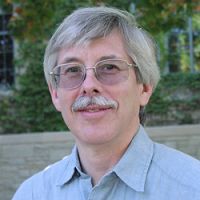 11 Mar 2016 - While urban and rural areas are seemingly polar opposites the two different areas depend greatly on one another, according to IML-CZO investigator... 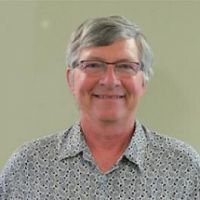