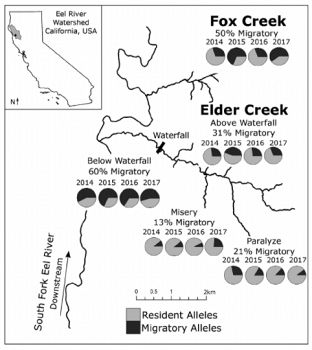 Many migratory species, from monarch butterflies to wildebeest, express partial migration, where only a subset of a population migrates. This intraspecific variation is likely to have large ecological consequences. We studied the ecological consequences of partial migration in a salmonid fish, Oncorhynchus mykiss , in coastal streams in California, USA. One ecotype, steelhead trout, migrates to the ocean, whereas the other, rainbow trout, completes its lifecycle in freshwater. Migration has a strong genetic basis in O. mykiss . In one stream, we found differences in the frequency of migration‐linked genotypes below and above a waterfall barrier (migratory allele frequency of 60% below vs. 31% above). Below the waterfall, in the migratory‐dominated region, the density of young fish (<1 yr old) was approximately twice that in the resident‐dominated region above the waterfall (0.46 vs. 0.26 individuals/m2, respectively), presumably reflecting the higher fecundity of migratory females. Additionally, there were half as many older fish (>1 yr old) in pools downstream of the waterfall (0.05 vs. 0.13 individuals/m2). In a second stream, between‐year variation in the dominance of migratory vs. resident fish allowed us to explore differences in fish density and size structure through time, and we found a consistent pattern. In brief, when migratory genotypes dominated, we found higher densities of young fish and lower densities of older fish, resulting in a simpler size structure, compared to when resident genotypes dominated. Moreover, large resident trout had a slightly higher trophic position than young fish (3.92 vs. 3.42 in one creek and 3.77 vs. 3.17 in the other), quantified with stable isotope data. The difference in fish size structure did not generate trophic cascades. Partial migration is widespread among migratory populations, as is phenotypic divergence between resident and migratory forms, suggesting the potential for widespread ecological effects arising from this common form of intraspecific variation.