On June 12-14, 2015, the Angelo Reserve was the site of another wonderful Eel River Algal Foray. Algal experts Dr. Paula Furey and Professors Rex Lowe and Yvonne Vadeboncoeur came out from Minnesota, Wisconsin, and Ohio to teach our neighbors and students from the Eel, Klamath, and other North Coast watersheds how to identify the major taxa of algae in the Eel River and other rivers of the California North Coast. Paula did postdoctoral algal field research in the Eel at Angelo. Rex (her Ph.D. advisor and also a long-time Angelino), Paula, and another of Rex’s former students, Jane Marks, have taught Berkeley ecologists much of what we know about Eel River algae, which play important roles in river and coastal food webs.   Rex Lowe has inspired students of algae throughout the US during his many forays and longer-term classes.   For a number of years, he and Paula have led Algal Forays at the Angelo Reserve–two-day events in which we invite our Eel and Klamath River neighbors to come learn about algae by collecting it, then identifying it (with Paula and Rex’s guidance) under microscopes in the Angelo Environmental Science Center. 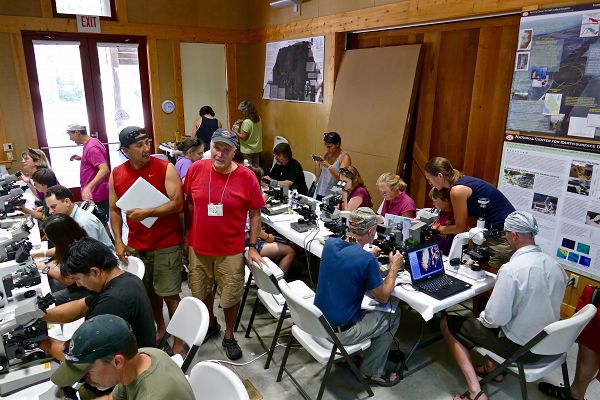 Algae have been the subject of considerable concern around the Eel and Klamath rivers, because of harmful blooms.  Under low summer flows, cyanobacterial blooms in the Eel River have been linked to at least eleven dog deaths. But not all algae deserve a bad rap!  Yvonne Vadeboncoeur, who gave us a lecture on her work on algal grazing by cichlid fishes of the Great Lakes of Africa, has a saying: “Algae should be eaten and not seen”. We think of algae as harmful when they bloom, make a mess, deplete oxygen in water, and in some cases, produce toxins. Yet the “good” algae (those that are grazed down, so remain inconspicuous, heeding Yvonne’s admonition) supply most of the energy and nutrition that supports aquatic life in the Eel River (and other sunlit rivers and lakes worldwide). Diatoms that grow on rocks and on macro-algal streamers in the Eel are the most nutritious food available for our native frog tadpoles, snails and the grazing aquatic invertebrates that feed salmon and other fishes. Diatoms are rich in fats, synthesizing poly-unsaturated fatty acids critical to animals (like us) who need these “pufas” but can’t make them. We humans eat fish for health, but the healthy lipids actually come from diatoms and similar algae in the food chains that fueled fish growth. As Rex says, “Diatoms don’t smell fishy; fish smell diatomy”. Foray visitors and students get to learn which algae we animals need to thank (e.g. diatoms) and which algae (certain cyanobacteria) we and our livestock and pets need to avoid.

The 2015 Foray participants arrived Thursday evening.  Friday, Saturday and Sunday we enjoyed discussions over meals prepared and served by Keith’s wife Lindsey, mother Wendy, and father Brian—thanks so much!   Friday morning, after orientation talks in the Environmental Science Center, we collected algae from the sunny mainstem South Fork Eel, from rock pools isolated near a wide bend in this mainstem, and sites on the darker tributary, Elder Creek. We then brought our whirl paks of algae to the lab for microscopy. Newcomers can be intimidated by looking down a microscope for the first time, but within hours, Rex and Paula have new algal initiates so entranced by the beauty and diversity they find in that micro-world that it can be difficult to get them to break for beer and dinner. 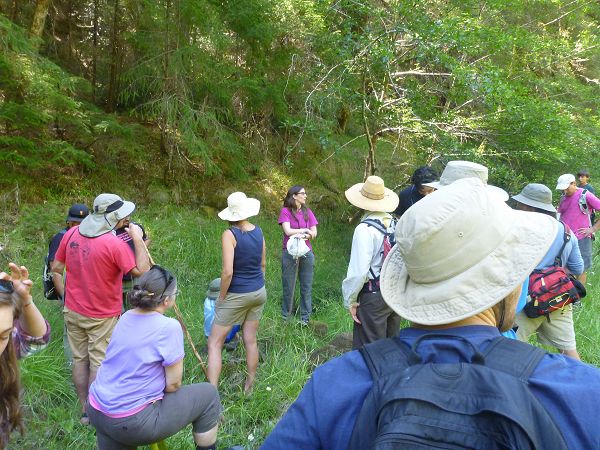 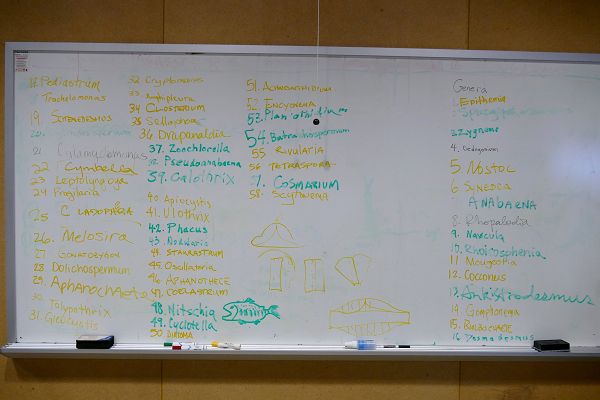 This year, we had great presentations and discussions from Rex, Paula, Yvonne, Keith, and guest lectures from Eli Asarian, Mike Deas, and Pat Higgins–folks who have watching the Eel and the Klamath river ecosystems for years. Pat Higgins and the Eel River Recovery Project volunteers have made many encouraging observations suggesting that river habitats as well as populations of salmon, steelhead, and even sturgeon have begun to recover from the massive logging era. Unfortunately, this recovery is threatened by erosion, pollution, and increased summer water extraction for expanding marijuana cultivation.  We need to understand how land and water use, climate, and ecological interactions can tip the Eel between cyanobacterially degraded and salmon-supporting states. Looking at the base of the food chain, at the algae that are eaten but not seen, versus those that are seen but not eaten, can guide us towards better understanding of how to keep rivers of Northern California on a trajectory towards ecological recovery.