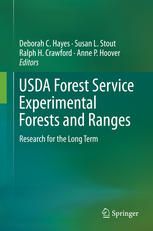 The US Department of Agriculture (USDA) Forest Service Calhoun Experimental Forest was organized in 1947 on the southern Piedmont to engage in research that today is called restoration ecology, to improve soils, forests, and watersheds in a region that had been severely degraded by nearly 150 years farming. Today, this 2,050-ha research forest is managed by the Sumter National Forest and Southern Research Station. In the early 1960s, the Calhoun Experimental Forest was closed as a base of scientific operations making way for a new laboratory in Research Triangle Park, NC. Many papers were written during the Calhoun’s 15 years of existence, papers that document how land-use history creates a complex of environmental forcings that are hard to unwind. One Calhoun field experiment remains active, however, and over nearly six decades has become a model for the study of soil and ecosystem change on timescales of decades. The experiment contributes greatly to our understanding of the effects of acid atmospheric deposition on soils, forests, and waters and of decadel changes in carbon and nutrient cycling in soils and forests. Perhaps the long-term experiment’s major contribution is its clear demonstration that soils are highly dynamic systems on timescales of decades and that this dynamism involves both surface and deep subsoils. The on-going experiment’s success is attributed to relatively simple experimental design, ample plot replication, rigorous (but not too arduous) protocol for resampling and archiving, and to its ability to address changing scientific and management priorities that are important to society and the environment. In the last decade, the experiment has become a platform for research and education that explore basic and applied science. As this manuscript goes to press, the Calhoun Experimental Forest has been designated to become one of the National Science Foundation’s national Critical Zone (CZ) Observatories, a development that will allow researchers to, return to the questions that originated the Calhoun Experimental Forest in the first place: how and why severely disturbed landscapes evolve through time.