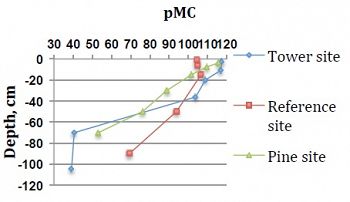 Figure 1: Distribution of radiocarbon in soils under different types of land use.

Figure 1: Distribution of radiocarbon in soils under different types of land use.

We have studied the distribution of 14C in Ultisols located in the Sumter National Forest. There we analyzed three sites:1) reference site, which presumably never was used for agriculture; 2) tower site, which was used for cotton growing from the beginning
of the 19th century untill the 1920s and in 1935 became National Forest and naturaly was reforested; 3) pine site with the same original history as tower site, but in the beginning of 1960s was planted with loblolly pine in a spacing study, which was partially
harvested in 2007 and re-planted with pine again. Our results are shown in the figure and table below.

Results
The performed experimental tests were aimed to find out the distribution of 14C in the same soil type under different kind of forest replanted after the deforestation and land use them for growing cotton for more than 100 years. According to Richter et al.[1] surface mineral soils have sequestered minimal carbon over 5 decades of forest development due to rapid decomposition rates of organic carbon input. However, our data show mean residence time (MRT) of carbon in the tower and pine sites is an least about 25 years in the top 10-15 cm, where accumulated more than 95% of the entire soil organic matter (SOM). On the contrary the reference site, which presumably has original hardwood forest the decomposition rates of SOM is more than 3 times faster according to MRT , which about 8 years for the top 10 cm. These results allow to estimate the rates of accumulation and decomposition of SOM and their changes under changes of land use and climate changes.

Cherkinsky, A., and Markewitz, D. (2015): 14C distribution in soils with different history of land use in Calhoun CZO. Goldschmidt Conference, Prague, CZ.