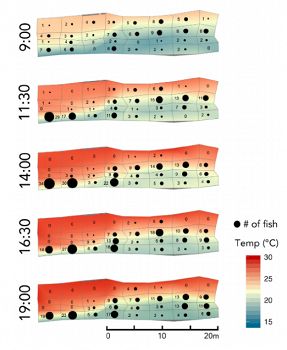 As rivers warm, cold‐water fish species may alleviate thermal stress by moving into localized thermal refuges such as cold‐water plumes created by cool tributary inflows. We quantified use of two tributary confluence plumes by juvenile steelhead, Oncorhynchus mykiss , throughout the summer, including how trout positioned themselves in relation to temperature within confluence plumes. At two confluences, Cedar and Elder creeks, along the South Fork Eel River, California, USA, we monitored temperatures using in situ logger grids throughout summer 2016. Fish were counted within confluences via snorkel surveys five times a day on 5 days at each site. We found diel and seasonal dependence on confluence use by steelhead, especially at the Cedar Creek confluence, where mainstem temperatures exceeded 28°C. At this site, fish moved into the confluence on the warmest days and warmest times of the day. Fish observed within the Cedar Creek confluence plume were most common in locations between 20–22°C, rather than the coldest locations (14.5°C). At Elder Creek, where mainstem temperatures remained below 24°C, there was little relationship between mainstem temperature and steelhead presence in the confluence plume. At both sites, steelhead distribution within plumes was influenced by spatial variation of temperature and mean temperature in surveyed grid cells. Our results show that cool tributaries flowing into warmer mainstem reaches (over 24°C) likely create important thermal refuges for juvenile steelhead. As mainstem rivers warm with climate change, cool‐water tributary inputs may become more important for sustaining cold‐water salmonids near the southern end of their range.