Fire perimeter from August 17 from http://geomac.gov in relation to Angelo Reserve boundary. 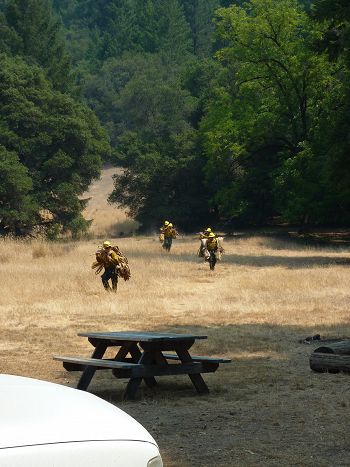 Firefighters returning from the ridges across Wilderness Meadow, carrying waterhoses.

Angelo Coast Range Reserve is the primary field site and home base for the Eel River CZO.   Dry lightning started a wildfire north of the Reserve on July 30th.  The fire was burning in heavy timber in the Elkhorn Ridge Wilderness and Eel River Canyon areas. The steep rugged terrain made access difficult. 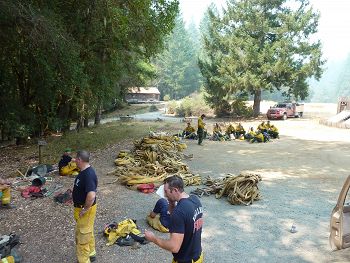 As of this posting, the Lodge Lightning Complex fire is 96% contained and the fire crews have moved on to other more pressing fires.  A skeleton crew of 100 remains for suppression and repair.  At its peak, there were 2,400 personnel, 186 fire engines, 28 bulldozers, 14 helicopters, and one heavy fixed wing airtanker.

The fire is now stable within fire breaks at 12,535 acres (50 km2).  988 acres (4.0 km2) of the Reserve burned, mostly due to controlled backfires.  One small watershed, Barnwell Creek (2 km2), was entirely within the burn area.  Fortunately, due to the lack of wind, the fire was a slow moving ground fire.  This is healthy for the Mendocino north coast ecosystem, which is fire adapted. 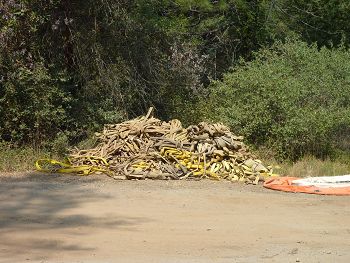 Piled up waterhose.  These were run from the South Fork Eel River up the firebreaks along the mountain ridges.

CalFire is now working with Reserve Steward, Peter Steel, on repairs and plans for erosion mitigation for the fire breaks on the steep slopes.

Piled up waterhose.  These were run from the South Fork Eel River up the firebreaks along the mountain ridges.

Firefighters returning from the ridges across Wilderness Meadow, carrying waterhoses.