Bruno Latour talks about the Calhoun CZO in Munich 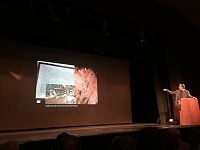 Bruno Latour, anthropologist and philosopher of science, gave a talk on Critical Zone science and the Anthropocene entitled "From the Anthropocene to the New Climatic Regime" in Munich, Germany on December 8, 2016, and along the way featured the Calhoun CZO as shown in the illustration. The photo was taken by former CCZO advisor, Prof. Paul Sutter, University of Colorado, author of the new book, Let Us All Praise Famous Gullies.  Sutter is studying environmental history in Europe on a sabbatical.  Latour recently authored an essay while at Cornell University entitled, "Is Geo-logy the new umbrella for all the sciences?  Hints for a new neo-Humboldtian university".  Critical zone science was in a way foreshadowed by Alexander Humboldt’s entirely interdisciplinary approach to the sciences.


In September 2015, the Calhoun CZO gave Latour a two-day field trip at the observatory, complete with visits and discussions to Calhoun’s experimental watersheds, the Tyger River, the long-term soil-ecosystem experiment, the 70-m deep Calhoun well, and to reference forests. Latour was accompanied by a number of Duke and UNC scholars from a variety of disciplines and a professional videographer, Eric Barstow, of Duke's Franklin Humanities Institute, which co-sponsored Latour's visit. After the Calhoun field trip, Latour spent a day at Duke with highlights that included a 90-min interaction with nearly 100 scholars entitled, "The Critical Zone Education of Bruno Latour", hosted by Drs. Deborah Jenson and Dan Richter, and a visit to the Duke Campus Farm hosted by Dr. Saskia Cornes.

Is Geo-logy the new umbrella for all the sciences? Hints for a neo-Humboldtian university
(263 KB pdf)
by Bruno Latour

Bruno Latour on "From the Anthropocene to the New Climatic Regime" 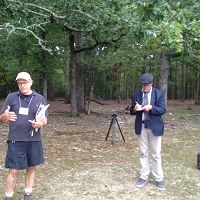 09 Oct 2015 - A dozen diverse scientists and scholars from five universities, united by their interest in Prof. Latour and in human-nature relations, traveled by...