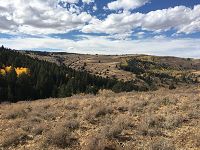 There is two to three times as much carbon in the Earth’s soil than in its atmosphere, which has important implications with regard to the effects of climate change, and scientists working at the National Science Foundation’s Reynolds Creek Critical Zone Observatory in southwest Idaho have developed a better method for estimating soil carbon. “Carbon storage at the Earth’s surface is an important process that helps regulate atmospheric carbon dioxide,” says Richard Yuretich, a program director in the National Science Foundation’s Division of Earth Sciences, which funded the research.  “This study unveils a method of better estimating the carbon content in Earth’s surface, and allows for more accurate modeling and prediction of carbon cycling through ecosystems and the atmosphere.”

The study was completed by researchers from Idaho State University and the United States Department of Agriculture Agricultural Research Service.  The title of the study is “Topographic controls of soil organic carbon on soil-mantled landscapes” and has been published in the journal Scientific Reports.  The paper’s lead authors were ISU’s Kathleen Lohse, associate professor of biological sciences and geosciences, and former ISU Ph.D. student Nicholas Patton, now at the University of Queensland in Australia.