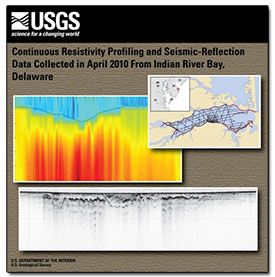 A geophysical survey to delineate the fresh-saline groundwater interface and associated sub-bottom sedimentary structures beneath Indian River Bay, Delaware, was carried out in April 2010. This included surveying at higher spatial resolution in the vicinity of a study site at Holts Landing, where intensive onshore and offshore studies were subsequently completed.

The total length of continuous resistivity profiling (CRP) survey lines was 145 kilometers (km), with 36 km of chirp seismic lines surveyed around the perimeter of the bay. Medium-resolution CRP surveying was performed using a 50-meter streamer in a baywide grid. Results of the surveying and data inversion showed the presence of many buried paleochannels beneath Indian River Bay that generally extended perpendicular from the shoreline in areas of modern tributaries, tidal creeks, and marshes. An especially wide and deep paleochannel system was imaged in the southeastern part of the bay near White Creek.

Many paleochannels also had high-resistivity anomalies corresponding to low-salinity groundwater plumes associated with them, likely due to the presence of fine-grained estuarine mud and peats in the channel fills that act as submarine confining units. Where present, these units allow plumes of low-salinity groundwater that was recharged onshore to move beyond the shoreline, creating a complex fresh-saline groundwater interface in the subsurface. The properties of this interface are important considerations in construction of accurate coastal groundwater flow models.

These models are required to help predict how nutrient-rich groundwater, recharged in agricultural watersheds such as this one, makes its way into coastal bays and impacts surface-water quality and estuarine ecosystems.

This publication is relevant to the Christina River Basin CZO but did not receive any direct or indirect support from it.