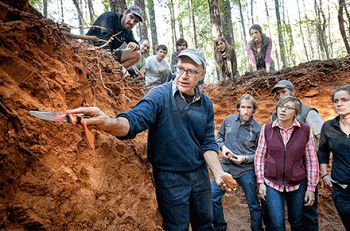 In a verdant woodland on the Calhoun Experimental Forest in South Carolina, soil scientist Daniel Richter peers into a gash in the ground. It's a kind of earthen operating room, where researchers have sliced open the soil to examine its subterranean profile. In the layers of sand and clay, Richter sees telltale signs of past ecological trauma. Nearly all the thick, yellow-brown topsoil that once capped this layered soil, named the Cecil, has been eroded away. “It's decapitated,” says Richter, a professor at Duke University in Durham, North Carolina. “We are looking at a natural soil-scape that 150 years of cotton, corn, wheat, and tobacco farming have all but destroyed.”

The Calhoun isn't the only place where the Cecil's head has gone missing. The soil covers some 40,000 square kilometers of the southeastern United States and is a regional icon, with North Carolina naming it the official state soil. But in many places, Richter says, intact Cecil is now “endangered, and may be nearly extinct.”