Natural, incidental, and engineered nanomaterials and their impacts on the Earth system 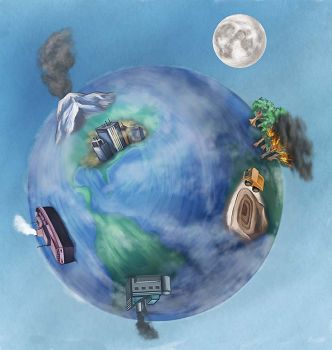 Nanomaterials are critical components in the Earth system’s past, present, and future characteristics and behavior.They have been present since Earth’s origin in great abundance. Life, from the earliest cells to modern humans, has evolved in intimate association with naturally occurring nanomaterials. This synergy began to shift considerably with human industrialization. Particularly since the Industrial Revolution some two-and-a-half centuries ago, incidental nanomaterials (produced unintentionally by human activity) have been continuously produced and distributed worldwide. In some areas, they now rival the amount of naturally occurring nanomaterials. In the past half-century, engineered nanomaterials have been produced in very small amounts relative to the other two types of nanomaterials, but still in large enough quantities to make them a consequential component of the planet. All nanomaterials, regardless of their origin, have distinct chemical and physical properties throughout their size range, clearly setting them apart from their macroscopic equivalents and necessitating careful study. Following major advances in experimental, computational, analytical, and field approaches, it is becoming possible to better assess and understand all types and origins of nanomaterials in the Earth system. It is also now possible to frame their immediate and long-term impact on environmental and human health at local, regional, and global scales.